Like just about all its onion shipping counterparts in the Northwest, Tat-On Inc. in Moses Lake, WA, saw a cooler and wetter than normal spring and a delay in planting, but company Vice President Heath Justesen told Onion Business this week that recent warm weather has helped considerably.

The longtime Moses Lake operation, which has marketed onions and potatoes since it was founded by Bob Suave and Chuck Moyer in 1991, has sold onions for Jensen Farms Produce the entire time and also sells for Terra Linda Farms in Riverdale, CA. Potatoes supplied by Desert Ridge Produce, and Tat-On offers both conventional and organic in both categories. Co-owners Will, who came from California, and Heath, a Moses Lake native, have headed up the Moses Lake-based company for decades, Will since 1998 and Heath since 2000.

Onions are the major item with a 60/40 split with potatoes, the Tat-On team said, and yellows are the biggest volume onions, followed by reds and whites.

The onion season runs through April and sometimes into May – notably, the 2017-18 crop ran into July –  and Heath said of 2018’s storage, “We just finished up our Washington crop last week and are getting ready for the California crop.  All in all, it was a good season.” But, he said, “The market was very odd this year with erratic pricing from all shipping areas and an unclear undefined ‘market price’ at times. I feel it was caused by some quality issues the Northwest dealt with throughout the season.”

Looking at the Washington crop’s progress, the sales group told us just before Memorial Weekend that the weather has been cooperating and the onions have caught up for the most part. Heath added, “We could definitely use some more heat units though – it has been very mild so far.  We will see new crop about mid-August or third week, depending on Mother Nature,”

The group agreed that the winter “dragged on a lot longer than we wanted it to, so we were nearly five weeks later planting than last year. However, last year was earlier than normal too.”

And, they noted, Tat-On does not overwinter, because those onions “tend to compete too heavily with the Imperial Valley onions, and we try not to do that if possible.”

They said the onion program does not change significantly year to year, with planting varying 100 acres up or down based on crop rotation.

The larger percentage of Tat-On’s onion volume goes to foodservice, but retail is increasing, and there is also a wholesale market segment. Packs are sized from consumers to 25- and 50-pound bags as well as 2,000-pound totes. And organics are also increasing.

“We do organic onions with Desert Ridge. That is a growing segment of our business, and Desert Ridge and the Hyers are great and do a fantastic job,” Heath said. “They are in the process of building a new facility, so we will have both onions and potatoes at the same location.”

That new facility and its all-new technology are part and parcel of the technological advancements being made on the farms and in the warehouses.

“We embrace technology on all levels,” Heath said, explaining that drones are utilized, and all harvesters are state of the art. In addition, irrigation and storage are all automated and controlled by smart phones with alerts for any issues at any time.

“It’s difficult to stay on top of the technology, but each year there is something added to automate more and more,” he said.  Jensen Farms is highly automated at all levels, and Terra Linda is adding new automation “as we speak,” the team said.

Another benefit of the automation is to increase retail market share, they commented. Heath explained, “For years we’ve had a focus on foodservice, and with the new equipment we’re able to expand retail and provide year-round.”

Tat-On will be represented at the upcoming July PMA Foodservice in Monterey by Heath and California-based Maria. 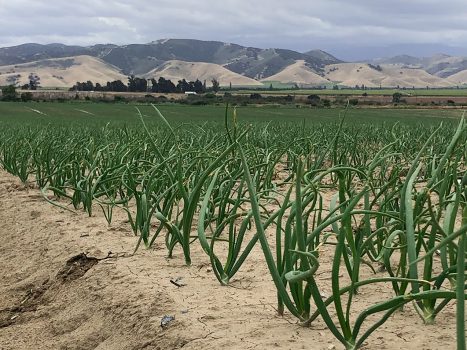