Freezing temps and ice storms brought by a cold front that started its sweep through Texas on Friday, Feb. 12, and continued throughout the weekend have left tens of thousands without power and prompted an emergency declaration on Sunday for all 54 counties in the Lone Star State.

In addition to the disruptions caused by the loss of power, the state also found itself contending with the issue of lost produce and commodity crops. Dante Galeazzi, president/CEO of the Texas International Produce Association, told OnionBusiness on Feb. 16 that “everything in the ground right now will be impacted.” That is upwards of 60 different crops, Dante said.

“In the Rio Grande County, where I am, between 35 and 40 crops are for sure affected,” he said.

He said the storm hit after an extended period of mild weather which had given some crops, including onions, a head start on the season.

“We had mild and dry weather, great conditions for a March 1 window,” he said. Usually the season kicks off closer to mid-March, and Dante said that mild weather had given some of the early 1015 Sweets, between 5-10 percent of the total crop, enough maturity that growers could bring them in earlier last week when weather reports noted the Arctic cold front moving south.

“They could get some of the fields early, but supplies will gap,” he said. Mid-season onions and later “are definitely impacted.”

South Texas has approximately 5,000 acres in onions, and Dante added, “Ninety percent of the Rio Grande Valley has a whole lot of question marks, and there will be a whole lot of watching. It will come down to field by field here.” And in the Uvalde/Winter Garden area, he said, snow covered the ground.

Describing the severity of the storm, he said, “Here in South Texas we had rain Saturday and Sunday, with the freeze hitting Sunday night. It didn’t warm up until after 1 p.m. today, and it’s supposed to get back to freezing again tonight, with temperatures even lower. And we’re in for another bout on Thursday night.

“What does that mean for our onion guys? Right now it’s tough to estimate the impact, and it could be two or three weeks before growers know how much has been hurt or lost. We are on the front end of the season, and the more mature onions were brought in.”

He continued, “The soil can be a good protectant against weather, but it’s going to be a few days before people can see what has happened. It’s very concerning.”

In addition to those grown in South Texas, onions grown in the Tampico region of Mexico are affected. “Mexico also had bad weather, and they face the same challenges,” Dante said. On Feb. 15 AP reported some 5 million customers in the northern part of the nation were without power when shortage of natural gas disrupted electricity production.

The story said that the Mexican government, which owns the utility, said its operations were “left short as the winter storm in Texas froze natural gas pipelines. Mexico uses gas to generate about 60 percent of its power, compared to about 40 percent in the United States.”

About two-thirds of the power had been restored by midday, mainly in the northern border states.

Meanwhile, as the Texas produce sector struggled with the weather, the storm disrupted life on virtually every other level for the entire state. At the request of Texas Gov. Gregg Abbott, President Joe Biden granted the emergency declaration that authorizes federal agencies to provide disaster relief.

Ice storms halted about half of the state’s wind turbine towers, according to Texas grid authorities, waylaying the second-biggest energy provider and causing rolling blackouts across the region.

In other parts of the nation – from the Northwest to the Atlantic – the Arctic front prompted officials in many states to issue winter storm warnings and advisories. As of Feb. 16, forecasts going into the week were calling for more heavy snow in the West and freezing rain across nation’s midsection and East. 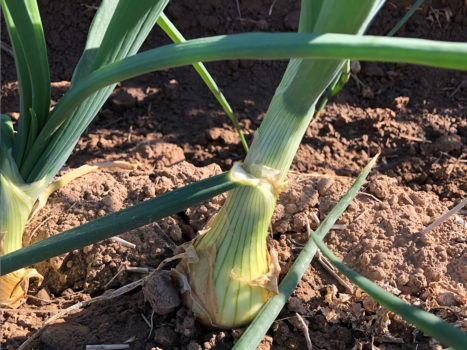