Got your green on?

On Friday, March 17, when the entire planet once again rocks, shifts and aligns with all things leprechaunish – when everyone’s family tree can claim an Irish ancestor – our favorite vegetable takes on added importance in the day’s fare.

Yep, it’s St. Patrick’s Day, and it cannot and will not be celebrated without onions. Take heart that there’s still a little bit o’ time to advertise and promote for the holiday.

How did this day come to be such a party? Well, what originated as a Christian observance of St. Patrick’s death in the year 461 A.D. (which when you think about it is hardly cause for partying), St. Paddy’s Day has over the millennia evolved into a lively celebration of Irish heritage and culture. There are huge parades and festivals, church services that in some places see the lifting of Lenten restrictions and, of course, remarkably delicious Irish fare. In the United States that includes the hybrid dish of corned beef and cabbage, which originated not in Ireland but actually in the upstart continent of North America.

Delish.com has the rundown on corned beef at http://www.delish.com/food/news/a38939/history-corned-beef-st-patricks-day-foods/, where it tells us, “Corned beef and cabbage isn’t actually the national dish of Ireland. You wouldn’t eat it on St. Patrick’s Day in Dublin, nor would you be likely to find it in Cork. So how did Corned Beef and Cabbage become synonymous with the Irish?

“During the time of the Irish immigration to the U.S., the first generation of Irish-Americans were in search of the comforting tastes of their homeland. On St. Paddy’s Day that meant boiled bacon. But the immigrants were too poor to afford the high price of pork and bacon products. Instead, they turned to the cheapest cut of meat available: beef brisket. Given that New York City was a melting pot for immigrants from around the world, rather than boil the beef, the Irish adopted cooking methods from other cultures. Brining was a technique of the Eastern Europeans, which is a way of salt-curing meat. And the corn? Well, “corned” has nothing to do with corn but instead refers to the corn-sized salt crystals used during the brining process. The corned beef was paired with cabbage, as it was one of the cheapest vegetables available to the Irish immigrants.”

So there you go. Onions are key not only to that meal but also to some posted by our friends at Shuman Produce. Go to the company’s Facebook page for more info and to http://www.realsweet.com/10-savory-st-patricks-day-recipes/ for crazy good food ideas for your own St. Patrick’s Day party. 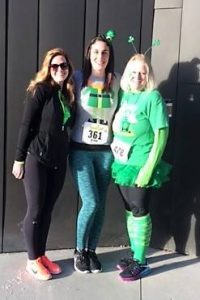 Facebook Image: Nancy, Olivia and Sara from Peri & Sons’ joined hundreds of others who dressed in green and had fun at the 5th Annual Leprechaun 5K Run/Walk in downtown Reno on March 12th.

Some of our friends celebrated early, such as the gang at Peri and Sons during the 5th Annual Leprechaun 5K Run/Walk in downtown Region on March 12. Great fun! 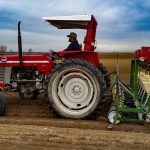