Rosenheim, in his second year with Tolsma, greeted visitors to the company’s booth at the two-day event.

While Tolsma has been operating in the United States since 2015, the company, which started in Holland as a wristwatch manufacturer, is actually 75 years old. It expanded into Netherlands potatoes, and by 1952 was developing potato storage systems. In the late 1960s the basis of the current company was established when Tolsma began manufacturing fans and triangular air ducts for potato storage, and soon the technology expanded to include removable partitions, temperature measurement and climate control.

Expansion abroad started in the 1980s, when Tolsma opened sales offices in Germany and France. The storage systems were being used for potatoes, onions and carrots, and more R&D resulted in mixed air units as well as compact refrigeration units. 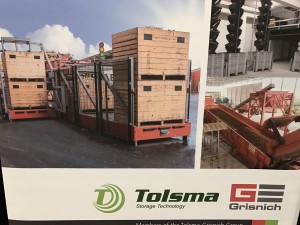 Over the next several years, Tolsma grew through acquisition, taking over Becom ventilation and control technology in 2005 and Grisnich, specialist in internal logistics and grading of potatoes, in 2007. Now under the name of Tolsma-Grisnich, the company provides multiple solutions under one roof.

Several new sales divisions have been opened worldwide, including the Boise office in 2015. In addition, technology continues to grow at the same time.

Rosenheim said connecting with existing and potential customers at events such as the Pacific Northwest Conference is beneficial for both sides of the equation.

“We truly benefit by participating in this conference,” he said. “It gives us the opportunity to connect face-to-face.” Rosenheim added that the company places heavy importance on customer service, so it is important to be where the customers are.

Rosenheim told OnionBusiness that Tolsma is working to become a major force for onion, potato, and carrot storage solutions and is currently involved in five onion storage projects in the Treasure Valley.

“And we are well-positioned to do more,” he said. “Our company and solutions are different than others because we focus on energy management and what is actually going on with the product while it is in storage. This is resonating with customers, and we are beginning to emerge as a major force in the industry.”

According to Rosenheim, Tolsma’s Vision Control System is like no other system on the market.

According to the company’s website, “The screen of the Vision Control shows a diagrammatic view of the storage and of the refrigeration. The status of the product and the installation are clearly shown. Furthermore, the Vision Control gives the uses automated tips for the optimal settings of the climate computer.”

The system’s energy management module sets the maximum allowed energy consumption and system priorities, and storage and other energy consuming facilities are automatically switched on or off. This results in the least storage losses and highest energy savings.

The system also includes a Weather Control, an “optimization module which, based on a 10-day weather forecast, takes intelligent decisions regarding the ventilation and refrigeration strategy. The module’s advantage is maintaining a more precise desired storage temperature of the product with lower weight loss and reduced energy costs.”

“He really is a guru when it comes to storing root vegetables,” Rosenheim said. “He has worked very hard to understand what is required to successfully store onions, potatoes, and carrots and has applied this understanding to the systems and products that Tolsma provides.”

Rosenheim told OnionBusiness that expanding to the United States was a natural progression in the success the company has seen in providing storage systems to Canada, specifically Prince Edwards Island. Tolsma now maintains 70 percent of the storage market for potatoes there. 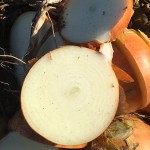