Our logistics go-to guy, Cain Adams at Trinity Logistics/Longboard Logistics in Meridian, ID, took an in-depth look at the cessation of Union Pacific’s Cold Connect as a result of lower demand and COVID-19 – addressing how it might impact transportation.

Beginning with a look back at various services that came – and went – Cain offered his take on how it could play out. One possibility, Cain said, is an intermodal service in the Columbia Basin, possibly Hermiston, OR, or the Wallula, WA, facility used by Railex and then Cold Connect.

In looking at the history of refrigerated transportation service in the Northwest, Cain cited both Cold Train and Railex. He said, “On Aug. 7, 2014, Cold Train ended intermodal service from Quincy WA, to 24 U.S. states and Ontario because of BNSF’s decreased on-time reliability. Cold Train did not come back. Reliability on time rail went from 90 percent in November to less than 5 percent in April.”

Then, in August of 2016, Railex dropped its perishable service to Florida, Cain said. “The company struggled at the Jacksonville facility that was too small,” he said.

Railex’s refrigerated rail service and third-party logistics services had been key to UP’s movement of perishables across the U.S., and it was cited as being a game changer with its fast and reliable service. After the acquisition, the service was known as Cold Connect.

Then came COVID-19. On May 8 word went out from UP/Cold Connect that the service was permanently closed, with low demand and COVID-19 cited as the combined reason. In a widely distributed release, the UP spokesperson said the decision “was not made lightly.”

Cain said, “This is a timeline of failed rail services. Let’s face it, at this point in time rail is outdated and does not have enough flexibility to handle cold chain logistics needs. Furthermore, we have to remember how many empty cars come from the East Coast to the West Coast. Trucks bring items back for $1- $2 per mile, probably much lower than the trains.”

And, he said, “No matter who manages the rail, they just seem to not be getting things connected at a cost to complete against trucks. Even when working together, Union Pacific and CSX could not keep Cold Connect on smooth tracks. I was talking to a veteran onion shipper today about how this will affect business in Washington. He said, ‘We will now only have one type of transportation mode. Trucks.’”

Cain continued, “He and I work a few loads from Washington to the New York area. I’ve always kept the number $6.75 per 50 in mind when shipping to New York. This was the magic number to compete with Railex/Cold Connect. If trucks were more than this number, the product went on the rail. If below, it went on a truck. It was actually a relief, at times, to hear product could be put on a train because of weather or the gouging from the carrier side.” And, he said, “Spot market pricing in the winter months can be a gamble. The customer may have a contract based on the magic number. Let’s say $6.75 but if trucking goes to $7.50-$8 per 50 for a few weeks it hurts the customer’s profit margin.”

About the Washington and the Columbia Basin, the question became, “Now what to do? What is in the future for produce and rail?” And Cain said, “My Washington veteran onion shipper and I were talking about alternatives, and he thinks intermodal is a good strategy for the railroad. I agree.”

He said, “As for the future of freight rates, we will just have to wait and see how COVID-19 will play out. Right now, we see some states opening up and others, like California, staying closed in parts until August. We are in a time of great uncertainty with no due date. In my opinion, I would look at 2019 for a pricing model.

“Freight out of California is headed north fast. Phoenix is coming up as well. Freight heading from an East Coast state to the West Coast is tough and paying about $1 per mile. This is pushing the market out of the Southwest up. Washington, Oregon and Idaho are seeing higher freight prices heading East and low pricing into California,” he said.

And Cain added, “As more businesses open up look for even higher prices going east. We may see $8500-$9000 from the Fresno area to Boston by June 15. Those trains really were helping to lower that number.” 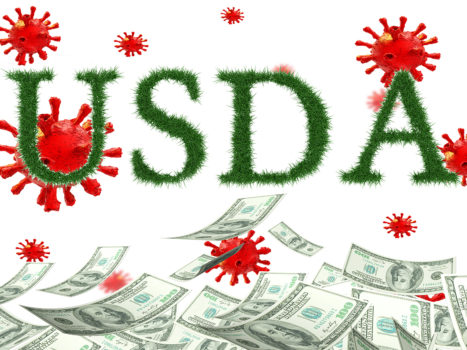 Details of CFAP explained by USDA