Three years after it was first proposed, the Treasure Valley Reload Center planned for the Nyssa area of Oregon has received approval for funding from the Oregon Transportation.

The approval came in the form of a unanimous 5-0 vote on Thursday, July 18, according to a press release from the Malheur County Economic Development Corp.

It said in its vote, the Oregon Transportation Commission approved funding for the Treasure Valley Reload Center which “will transport products, mainly onions to start, from eastern Oregon to customers throughout the United States.”

The release added, “Currently, the majority of onions grown in the area are shipped via truck and consumed on the East Coast.” And, it continued, “The approval from the commission comes after three years since the initial idea. Under House Bill 2017, the State of Oregon approved spending for two rail centers, one on each side of the state. Under the guidance of the Malheur County Development Corporation, a center in Nyssa was proposed.”

“This center was approved due to the hard work of the board of MCDC and the support of the Malheur County Court,” said Greg Smith, director of Malheur County Economic Development and board member. “The onion industry has been behind this project since the inception and has been great. We thank all our partners in this and the public standing behind us.”

The project now goes forward with design and contracts with multiple parties. “We have a tremendous amount of work to do in the next few months,” Smith commented “This is an exciting time for all of Malheur County and beyond. The reload facility is a regional success, one to be used by businesses beyond the Oregon border. We are excited for the day the first shovel of dirt will be turned.”

The process was long “but necessary,” Smith said.  “The commission and the Oregon Department of Transportation were very cautious in the use of taxpayer dollars,” he said. “Rightfully so, we proved the viability of the project and the need for it in the eastern part of the state. We thank the commission for asking the tough questions and allowing us to prove the project.”

Board Chair Grant Kitamura said the rail facility is the answer to a long-term problem for local producers.

“We have faced transportation problems for years and a shortage of methods in delivering our product,” Kitamura was quoted as saying. “This rail facility ensures the onion industry will be able to continue delivering the product for years to come. It is a guarantee for the next generation of onion producers in Oregon and Idaho.”

Also commenting was Malheur County Commissioner Larry Wilson, who attended the hearing and has been a part of the project since its inception.

He said in the prepared statement, “This is a big step forward for Malheur County. The board has been tremendous in forwarding this project, and I also want to thank Greg Smith and Malheur County Economic Development for all their hard work. So many people have thousands of hours over the last three years into making today successful.” 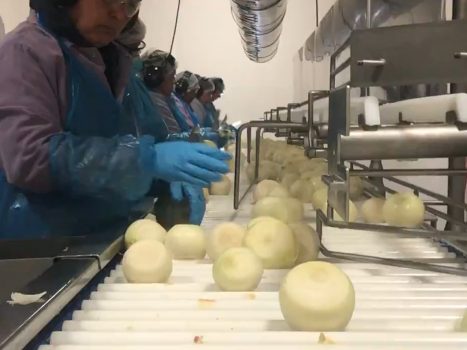 Gills continues to lead with innovation, cost-effectiveness and sustainability