Springtime in the Treasure Valley of Idaho-Eastern Oregon is ushering in a rebirth of sorts to the region’s onion industry, which suffered considerable losses during the “Snowmageddon” of December and January.

OnionBusiness.com has been in contact with many of the shippers who were impacted by the storms, and we can report that all we’ve interviewed are in the process of rebuilding. In most cases, the companies will go into the upcoming season with bigger and better facilities, including new technology in their equipment. Both growers and shippers are confident they’ll be ready to start the season on schedule.

The series of storms that started last December and continued without letting up through much of January took a terrible toll in the region, with more than a dozen structures collapsing under the weight of record snow and also ice buildup on roofs. Some packing lines and several storage sheds were lost to the weather. While many of the storages were empty, others sheltered thousands of full bins, and some Treasure Valley shippers lost millions of pounds of onions.

Both Oregon Gov. Kate Brown and Idaho Gov. Butch Otter, along with state representatives and local agencies, activated emergency services in January, and in March, as the snow and ice began to melt, farmers took to the fields and shed rebuilding efforts began.

As we reported at the time, the first reports of storm losses came in on Sunday, Jan. 8, when Four Rivers Onion Packing in Weiser, ID, saw snow collapse the roof of the packing shed.

On March 29 Ken Stewart with Four Rivers Onion gave us an update. He told OnionBusiness.com, “Never in a million years would we have asked for this year’s winter storms to cause damages and impact our operation, but we are rebuilding and will be ready to ship late this summer and on time for harvest.”

Ken said Four Rivers is rebuilding both storage and its packing line, and he said, “The rebuild will include numerous changes, and we will be in a better position to pack higher volume.” The changes are to include a new cup-sizer and technology to assist in grading.

After the collapse of the Weiser stricture, more reports started to come in. In Nyssa, OR, Owyhee Produce lost four buildings, three on-site and one outlying storage, and General Manager Shay Myers reported some 22 million pounds of onions had been lost. The operation began razing the damaged structures in March in preparation for rebuilding. See Owyhee’s videos included at the end of our story for details and amazing video of the work.

Also checking in on March 29 from Ontario, OR, was Chris Woo with Murakami Produce. He told OnionBusiness.com that although the company did not lose any buildings, Murakami is working with engineers to assess if any reinforcements need to be made.

“We are making the effort to ensure all of our buildings are sound and don’t have hidden issues as a result of the storms,” Chris said in late March. “We are doing this while moving forward with our building construction for the new Baker and Murakami merger,” which he said was in place long before the storms hit the region.

Dwayne Fisher with Champion Produce Sales told us on March 29 that Champion is completely replacing two storage buildings it lost and is currently working with insurance adjusters and construction contractors. A third storage building may be repaired or replaced, he said, noting that assessments are being made this week. He said the shed facilities and line were unaffected.

We also reported on more storages in Ontario collapsing along with structures in Nyssa and Vale, OR. Snake River Produce in Nyssa had its packed product facility collapsed on Jan. 19 but resumed packing four days later. In the days between the first collapse and the start up, Snake saw two more storages go down and reported the loss of 21,000 pounds of bagged onions. 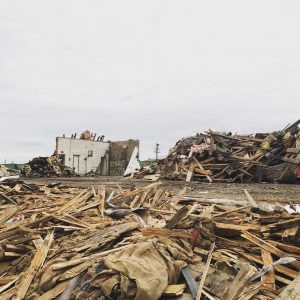 Snake River Produce, too, is rebounding. On March 29 the company posted the following text, along with a photo of the downed facility, on its Facebook page: “We are still working on demolition and debris removal from this crazy winter. It’s pretty sad to see these buildings come down, but we’re in the process of rebuilding and will be stronger in the future!”

Transportation was severely hampered for several weeks because of the weather, and not only did the region see a slowdown in movement of product to receivers but also in getting product from storages to packing sheds. Additionally, much of the area was also closely monitoring river levels, with ice floes causing backups and potential serious flooding. There was some localized flooding, but we didn’t receive word of any onion facilities being affected by that storm-related situation.

We will bring you updates from shippers who are rebuilding as the opportunities arise.

Facebook videos as posted by Owyhee Produce in March 2017: 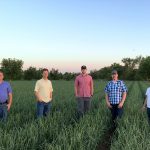