While there’s no denying the “Snowmageddon” storms in December and January hit some in the Treasure Valley’s onion industry hard, the volume of onions remaining to be shipped out of Idaho-Eastern Oregon is still strong and movement good.

Some of the region’s growers and shippers suffered significant losses of both structures and product, but most operations didn’t lose an onion, according to several industry members.

Nyssa, OR, grower Paul Skeen told The Argus Observer newspaper in Ontario, OR, “We are not out of onions.” Paul is president of the Malheur County Onion Growers Association and told the reporter in a story accessible at http://www.argusobserver.com/news/governor-kate-brown-tour-area/article_dd841a6a-efe1-11e6-9364-27f847aa4bee.html that while a number of facilities incurred damage, “We still have onions” that are being packed and shipped.

Grant Kitamura, president and GM of Murakami Produce LLC in Ontario, OR, told OnionBusiness.com that “IEO and Murakami are here to stay and will remain very strong for the balance of the season.”

He said, “We are like most shippers in the region — we haven’t lost one onion as a result of the winter storms.”

Murakami did contend with the enormous volume of snow and ice, and Grant added, “It was very expensive to do all the cleanup and get the snow off the roofs, but our ability to ship and service our customers hasn’t been an issue. We understand that a number of shippers lost supplies and a few lost the ability to pack, but overall most shippers are continuing with business as usual.”

Grant also said that Murakami intends to ship into May and has refrigerated storage that will easily accommodate late season shipments.

“We are still in the game, and we have high quality product available to ship,” Grant said. “And I am very optimistic about moving forward.”

Also reporting from Ontario was Steve Baker at Baker Packing. Steve said Baker Packing did not lose any onions due to the storms, and he added, “We are able to ship at full capacity.”

He continued, “The storms impacted Baker Packing at various times. We had a building go down that had packing supplies and some storage equipment in it, and we also had some trucks damaged from a lean-to roof that collapsed at another storage building we were renting. We did have some structural damage in our packing facility, causing us to stop production. It really affected us off and on for about a two-week period.”

Like others, Steve has found the cost of snow removal to be substantial. “It was a huge undertaking to remove snow off the buildings,” he said. “We tried to be as proactive as possible. Also getting the snow removed from around our buildings and streets was crucial, and we hired outside contractors with big front-end loaders to come in.”

In addition, Baker had to clear snow off the railroad tracks at the site “if we wanted service from the Union Pacific Railroad,” he said.

But Steve said the region’s community of onion growers and shippers will come back from the situation, dire as it has been over the course of the last several weeks,

“Even with all of the issues with a once-in-a-lifetime storm the Idaho-Oregon onions shippers are able to ship and deliver high quality onions to our customers,” he said.

In Weiser, ID, Herb Haun at Haun Packing concurred, saying, “We’re all pretty much sitting on normal supplies at this point, and we should finish up here at our operation on March 20, which is our normal date.”

Herb said most businesses are on a normal schedule and have good supplies.

“We didn’t lose any onions at Haun Packing,” he said. “We did lose one storage building, but we had finished running everything in it, and it was sitting empty.”

“Quality is still excellent,” he continued. “Even with all the snow, our humidity was low, and our storages have held really well. All in all I look for our area to have a normal finish to the season.”

He said planting for the 2017-18 shipping season “could be delayed a week to 10 days, but we can still make a good crop if we get in early to mid-April.” Herb said early planting generally starts around March 10. “We’re usually finished April 10,” he said. “I really don’t anticipate problems at this point.” 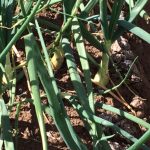 Market and Crop Updates for Feb. 16