Trish Lovell, ‘Idaho girl,’ tells it like it is

As a frequent contributor to OnionBusiness.com’s market and crop reports, Trish Lovell gives the straight skinny in providing information.

If it’s brutal out there, Trish says so. And when it’s good, she is among the first to share the news. Whatever her take, though, it’s always appreciated.

We asked Trish, who has sold onions and potatoes for Pasco, WA-based Agri-Pack (which recently became part of CSS Farms) since 2013, to tell us a bit about herself, and we were surprised to learn she’s from… Southern California.

“I was born in Southern California, but I was raised in Idaho,” she said. “I will always call myself an Idaho girl!”

Those who know Trish are familiar with her dedication to her job. She takes it seriously, but she also understands the importance of living life outside the office.

Married with “three grown children and seven perfect grandchildren,” Trish counts her grands as “my greatest joy in life.”

She said, “My personal life is surrounded with my husband, children, and grandchildren.” Trish is also a woman of deep and abiding faith, and she’s not shy about crediting God as the source of all that joy.

And she’s also quick to give credit to industry insiders who put her on the path to produce sales.

“I started in 1986 with De Bruyn Produce, which became Baker Packing in Ontario, OR,” Trish told us. “I owe it all to Jerry and Steve Baker. They are my mentors and forever my work family.”

She speaks fluent onion-ese with decades of experience selling Northwestern storage onions, and when she joined Agri-Pack she started working in potatoes. The acquisition by CSS Potato Farms, which extends the South Dakota potato and onion grower/packer/distributor to facilities and operations in 13 states, has brought changes, and Trish said the transition has been all positive.

“I am really enjoying the changes, the new owners and staff,” she said. “It’s great to see the changes here and the move towards the future in the agricultural business.”

With the good changes, Trish – along with everyone in the produce industry – is concerned about issues that are constant.

“Wages, labor and transportation are always issues we all deal with every year,” she said. “It never eases up. The cost to grow, pack and ship continues to go up, and we have to continually look for ways to cut costs at all levels.”

“We all must create ways to cut costs,” she said. “Costs are going up, but the price of product remains weak. With the new electronic log book law, buying habits and deliveries will be affected.”

She added, “I see more and more shipments in the future going via Railex with the new facility in the Treasure Valley. Transportation is getting tough, and costs are going up.”

But, again, Trish balances the sobering facts of business with the rewards from her job. They are, she said, “the friendships that have been created along the way and the lessons and values I have learned from this industry.” 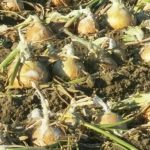 Market and Crop Update for August 17