With her trademark optimism, onion industry veteran Trish Lovell told OnionBusiness this week she’s happy to be back in Ontario, OR, where she recently joined the sales team at Baker & Murakami Produce.

Trish started on April 20 and about working strictly onions again, “Onions is where it all began.”

“All” is a longstanding career in produce that started in 1986 when she joined Jerry and Steve Baker at what was then DeBruyn Produce in Ontario. When we spoke with Trish this week, she told us, “I was mentored by the best, and now I’m back with the best.”

Trish has worked with several onion houses over the past 30-plus years, including Curry & Co. in Oregon and Agri-Pack in Washington before coming full circle to Ontario to Baker & Murakami Produce. Over the years there have been changes, of course: DeBruyn became Baker Packing, and that company and Murakami Produce combined strengths to form Baker & Murakami in 2017. Today Trish finds herself at the same physical location where she started her produce career – and with some of the same people.

“I am excited to be back with Jerry, Steve and rest of the team,” she said a week into her new position. “We will work together as a team with our focus on exemplary customer service, highest quality, progressive innovative and continually improving.”

She added, “I’m really impressed with the new packing line. And I’m impressed with the growth and the ideas. The new team they put together is remarkable – everyone works so well together. It’s so comfortable, like coming home to family. Steve said to me the other day, ‘It’s like you never left,’ and that’s how I feel. It’s great to come full circle.”

About the current uncertainty brought about by COVID-19, Trish said it’s definitely motivated people to check their priorities. Spending time with family is good, and she and husband Logan have a house in Nampa now, near their son and his family.

The industry, too, is checking its priorities, and Trish said, “With all that has affected the world in the last few weeks, who knows what the future holds? But like all businesses, we will proceed as normal with optimism in planning for the next season.” 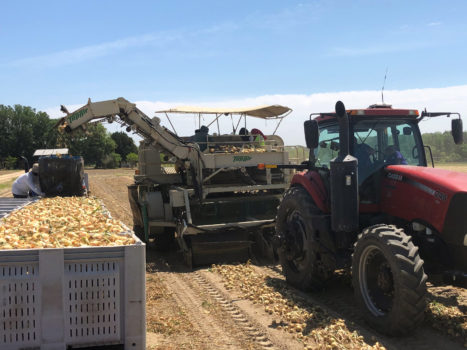