With the 2021 new crop onions expected to begin shipping from its Calipatria, CA, facility on April 25, Troy Caston Farms kicks off the year by offering 2-, 3- and 5-pound consumer packs for its customers.

According to John Vlahandreas with Wada Farms, a consumer pack bagging machine is among several upgrades made to the operation over the last year.

“In 2020 Troy first put in a drying room,” John said, noting the company also invested in an in-line singulator for stickering individual and carton onions. The bagging machine was purchased last year as well and put into operation for the 2021 season, he said in a March 10 interview with OnionBusiness.

Now a second-generation farm started by Troy’s father, Art, in 1951, the original H. Caston Farms grew celery, asparagus, carrots, tomatoes and artichokes along with the mainstay crop of onions. Troy took the helm in 1990, putting the primary focus on onions. And John, who has been in the industry since the late 1980s, joined with Troy in the mid- ‘90s. The partnership with Wada Farms began in 2007, with John facilitating the onion program between Wada and Caston. Wada Farms, which has onion interests in numerous growing regions across the nation, is now exclusive sales agent for Troy Caston Farms.

During the interview, John described some of the changes in the Imperial Valley onion industry over the years, explaining that when he started, onions were loaded on the floor rather than using pallets. The trend went to cardboard and then returnable plastic pallets before wood became the standard.

He added that harvesting and packing methods have also been modified. Yellow onions, once hand-clipped, are now all mechanically harvested, although reds and whites are still clipped by hand. Harvest and carton/bag packing crews now work through the night instead of during the heat of the desert day. With the new equipment at Caston Farms, the consumer packs and stickering are done during the day, John said.

The deal itself also has gone through changes, evolving from an April 15 start and run of six to eight weeks to a shorter period, and he said, “We plan to start April 25 this year and run for about 30 days.” The shed will begin with yellows for three days and then add reds, “depending on the weather.” Whites will be added about three days after the reds start running.

Crediting Troy Caston with the recent innovations, John said Troy Caston used to be “like Henry Ford,” and told customers, “You can get any onion you want, as long as it’s a 50# or 25# bag.” He continued, “Troy did a 180 this year on his planning and really stepped up his onion program.” In describing the upgrades for this season, John said, “I was amazed at the progress Troy made in a short time. He’s doing things we need to market.”

“It’s a fun deal and a different onion,” John said, noting that the new crop Imperial Valley onion sports a flakier skin than copper-colored storage onions that are winding down as the Imperial Valley comes on. “The onions grown here are mild and have a high water content. They cook and caramelize really well – with a different look.” 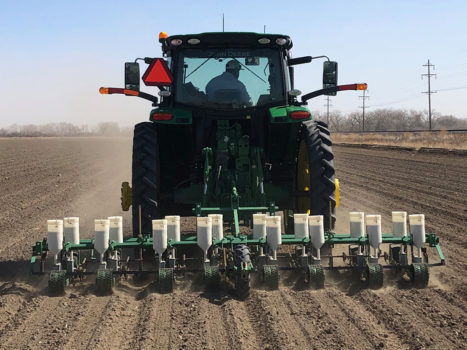