Utah Onions will announce its new sustainability program at the upcoming PMA Fresh Summit in Atlanta Oct. 23-25, according to UO Vice President Shawn Hartley. The company will exhibit at booth 4614.

Shawn told OnionBusiness the expo, attended by tens of thousands produce industry members, provides the company a great platform for this announcement as well as an opportunity to “meet with our customers, show our products and strengthen our relationships.”

The sustainability program encompasses all aspects of the Syracuse, UT, he said. “We’ll be showing some exciting new stuff in Atlanta,” Shawn added.

One of the country’s leading onion grower/shippers, Utah Onions provides its customers with yellow, red, white, sweet and organic onions and has growing operations in Utah, Idaho, Oregon and Washington.

More than seven decades ago, the company was launched by the enterprising Charles H. Dredge, who packed and sold onions and other produce for growers in the Syracuse area. Dredge sold the company in 1977 to four Utah farmers and investors from Texas, and the group expanded the operation to a vertically integrated growing/shipping/packing/marketing company. In the late 1980s trade partners Hartley’s Best and Oregon Trail Produce joined forces as well.

Utah Onions changed hands again in 2005 when Shawn and Trent Hartley and Brad Dahl bought the company and continued its growth curve with additional growers.

Currently the company is wrapping up its 2015 harvest, which Shawn said was 70 percent in storage.

“Quality and size are good, and we’ve got an average-to-above crop,” he said. 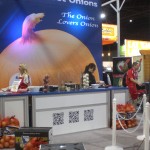