The Vidalia Onion Committee announced on March 30 that Vidalia onions are on the official menu for the 2021 Kentucky Derby on April 30 and May 1. The famed sweet onions will be featured in several dishes served during the “Most Exciting Two Minutes in Sports” that comes just days after the official Vidalia pack date of April 19.

Held annually and almost always on the first Saturday in May, the Derby traditionally caps a two-week-long festival. Up to 20 three-year-old Thoroughbreds run the distance of 1.25 miles at Churchill Downs. Last year’s Derby, the 147th annual, was postponed because of COVID, but it’s returning in 2021 with considerable fanfare – and Vidalia onions.

Aries Haygood, the VOC Chairman, commented, “After a year that has been challenging for all of us, we hope our first-ever partnership with the Kentucky Derby will serve as a tiny beacon of normal life by bringing together two of the country’s beloved ‘rites of spring.’

We are honored to be part of the official menu of this year’s Derby.”

And Mike Anderson, President of Churchill Downs Racetrack, added, “We are thrilled to have the Vidalia Onion Committee as a sponsor for the 2021 Kentucky Derby. And, of course, we can’t wait to taste our official menu dishes containing the unique flavor of America’s favorite sweet onion.”

Vidalia onions will be featured in several dishes on the official Derby menu including Chicken with Vidalia Onion and Mushroom Sauce and Vidalia Onion, Bourbon Sorghum Vinaigrette on a Black Eyed Pea Salad. Recipes are downloadable from https://www.kentuckyderby.com/party/recipes/kentucky-derby-147-at-home-menu/pulled-pork-sliders-with-peach-and-vidalia-onion-chutney.

“Like chefs and home cooks across the country, I know there is nothing else to compare to the sweet, mild flavor of Vidalia onions,” said Churchill Down’s Executive Chef David Danielson, the culinary artist behind the annual Kentucky Derby official menu. “We think this year’s Derby fans are going to love the items on the menu that feature Vidalia onions.” 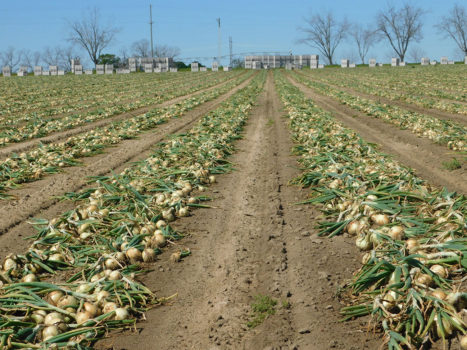