View photo gallery at the conclusion of the story

Meeting its goal of 1,200 in-person attendees, the 2021 Viva Fresh Expo – the first live produce gathering in more than a year – brought more than 200 foodservice and retail buyers to a bustling show hosted at the Gaylord Texas Resort and Convention Center in Grapevine, TX, March 25-27

And, according to Texas International Produce Association President/CEO Dante Galeazzi, the event and its more than 148-booth expo were in turn met with renewed enthusiasm and optimism in the industry.

“The overall attitude was incredible, and one of the themes we continued to hear from those in attendance was just how excited, positive and ready they were to reunite with others in the industry,” Dante told OnionBusiness at the close of the show. He and his team spent more than half a year prepping for the expo, which was held at the convention venue located near Dallas/Ft. Worth Airport and is planned for the same site April 21-23, 2022.

An annual highlight, the Viva Fresh Open saw such good response that it called for two courses and was held at the Jeff Brauer-designed Cowboys Golf Club and the Bear Creek Golf Course.

Dante said, “The incredible amount of planning and organizational efforts that were in place ahead of the show paid off in big dividends as we saw the colored badge holder system indicating comfort-levels for interactions, various masked and mask-optional sections to provide custom safety to each attendee, and of course the ability for industry members to again see each other, network and partake of Viva Fresh hospitality all went off without a hitch.”

Launched in 2015 as a showcase for the Tex-Mex corridor, Viva Fresh selects its exhibitors to fully reflect the huge variety of produce production in the region.

This year the event faced not only the effects of COVID-19’s restrictions during 2020 but also the recent damage to many of the area’s crops by a February freeze.

“Unfortunately, the impact of the freeze was clearly visible at the show,” Dante said. “We had some growers that had to bow out due to no product. Some of the Texas growers had to bring marketing and promotional materials in place of lost product, especially our citrus folks.”

However, he noted, “The growers with onions and cabbage did have some product on-hand, as those damages seemed to remain minimal following the Valentine Freeze.”

The networking opportunities and relaxed pace of Viva Fresh is complimented by the focus on health and nutrition in the presentation. This season Viva Fresh created a central theme of “Clean Eating,” which started in November 2020.

Noting that fresh produce from the “one-stop-shop” Tex-Mex corridor is key to clean eating, Dante said that TIPA and Viva Fresh are working to change the poor dietary habits of many consumers. He told OnionBusiness earlier, “We want people, industry and consumers alike, to see fresh produce the way we see it. For the flavor, the nutrition, and the incredibly diversity.” 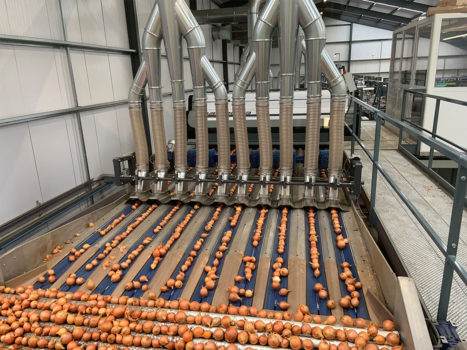