For the better part of the last decade Walla Walla Sweet Onion growers have been working on a new wrinkle to a generations-old deal, and this year it’s being rolled out by Keystone Fruit Marketing with the first limited commercial volume of the red Walla Walla Sweets.

Keystone’s Dan Borer told OnionBusiness.com the crop overall looks very good as of late May, and he said he anticipates a typical start date in mid-June. The yellows, with a good range of sizes and heavy to jumbos, could run into August.

Dan explained the reds, like the yellow Walla Walla Sweets, are grown only in the federally established growing region, and are open-pollinated and hand-selected for propagation. The multi-year process ensures a purity of the Walla Walla Sweets, and Dan said just like their yellow kin, the reds are mild and sweet.

“It’s not as deep a red as some red onions, but, oh, it’s got the taste,” he said of the flavor that sets Walla Walla Sweets apart. He added, “It’s different from the sweet onions we grow in other places.”

As a different shade of the Washington State Vegetable, the red Walla Walla Sweet “has to be grown in isolation” to maintain the purity as well. “There isn’t a huge volume,” Dan said. “It’s not mass produced,” but we definitely feel this onion has a place in the marketplace.”

The Walla Walla growing region has experienced good growing weather with only scattered events, and Dan said there has been both good heat and ample rain.

“We have a loyal customer base that appreciates the attributes of Walla Walla Sweets,” he said of the onion that’s become a summer tradition. Still, there are palates to reach and convince with an onion that can be covered with caramel eaten like a candied apple.

“We realized we had to get with the times with social media,” he continued. “And now we’re starting to move in another direction with our advertising.” 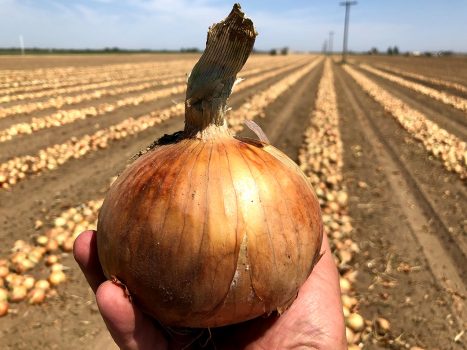