While we’re seeing postcard-perfect onion growing weather in some parts of the country, other regions have experienced a few unlady-like burps from Mother Nature this spring.

Some concern was shared last week by growers in California’s Imperial Valley about the recent heat wave and high temperatures in the forecast. However, the California heat isn’t an issue, according to Derek Ennis with Raleigh, NC-based L&M Companies.

“Heat in the Imperial Valley is normal,” Derek told us on May 16. “Even though we have had some high temperatures, recently the temps have come back down and we have had some cooler nights. It does look like the temps could be climbing back up, but that’s nothing out of the ordinary. California onions do well in the heat, and we don’t anticipate any problems at all.”

From the Idaho-Eastern Oregon Treasure Valley area, Stuart Reitz with the Malheur Extension Office in Ontario, OR, posted a treatment plan for onions in the region that may have received hail on the Pacific NW crop alert system http://pnwpestalert.net/alerts/crops/. 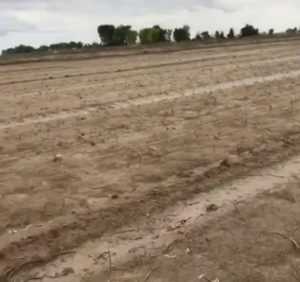 Stuart’s May 6 post stated, “A strong thunderstorm with high winds and hail crossed through parts of the valley Sunday evening. According to the National Weather Service, it went from Nyssa to the Fruitland and Payette areas.” OnionBusiness.com was able to confirm the hail was isolated and not widespread. However, photos of the storm posted on Instagram reflect that the hail had enough size to have an impact on the acres that were hit.

Colorado was beat up by high winds back in April when some portions of the state experienced sustained wind velocity of 20-35 mph and gusts up to 80 mph. Sakata Farms in Brighton lost acreage, but Robert Sakata has since replanted, and the crop is doing well. Some of it will come in later. Since the winds of April, the Centennial State has seen some rain, although growers in many regions are facing cutbacks in irrigation, and drought conditions prevail.

In Georgia, Danny Ray with Ray Farms in Glennville said the Vidalia region is bracing for tropical storms. “We are watching the weather closely right now,” Danny said on May 16. “We haven’t finished harvest, and there are tropical storms in the forecast that could produce up to seven days’ worth of rains. We will just have to keep working and hope for the best.”

And hoping for the best has worked well for Vidalia so far this year. What was anticipated to be a reduced crop coming off a harder than normal Georgia winter turned out to be a crop with good volume and high quality. 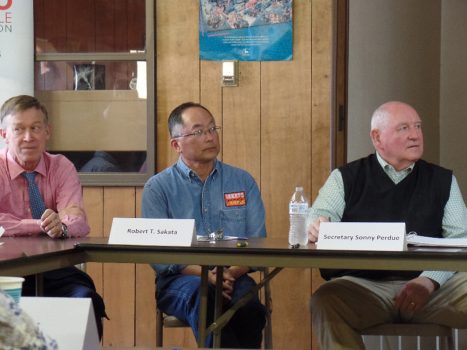