As cleanup continues following the destructive storms across the Southeast during the week of April 3, Vidalia onion growers and shippers continued to prepare for the April 12 start date.

According to Cliff Riner, Vidalia Onion and Vegetable Research Center coordinator and area onion agent with the University of Georgia Extension Service in Lyons, the crop was spared from the worst of the storm.

“I would say that we were blessed to have as little damage as we did,” Cliff told OnionBusiness.com on April 10. “The most severe issue was hail that was scattered throughout the belt. However most hail was light to moderate in size and severity and hasn’t caused any complete losses of fields that I have been told.”

Cliff said some fields were hit, but he added that “damage should be able to grade through.” Rainfall in the region ranged from one to three inches, and he said, “That is of some concern, but we didn’t receive the rainfall that was predicted over about a four-day period.”

He said, “So weather-wise, I think everyone is humbled but feels somewhat blessed it wasn’t worse. Delays were caused, but it was dry enough that we shouldn’t be out of most fields long.”

As the fields began to dry out, Cliff said, “We are digging at full speed. Sizing potential looks good. However some fields were plowed up early ahead of rain. I am pleased that the temperatures have cooled off slightly.”

With the start date just hours away, Cliff said, “The next two weeks are going to be extremely busy in digging and clipping. Our crop is jammed into one maturity, and we simply need good weather to get the onions up. The potential for a great crop is there, but we cannot have any delays for the next three weeks.” 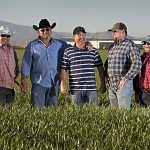