Maybe it was the nearly perfect growing season, or maybe it was the careful crop management by OSU’s Malheur Experiment Station staff, but growers and seed dealers mostly agreed that this year’s onion trials located just west of Ontario, OR, produced onions large in size and what appeared to be quality as well.

Outgoing Experiment Station Director Clint Shock told us at the trials on Tuesday, Aug. 28, that last year it was difficult to get all the seed in on time due to the wet spring.

“This year, we had a very mellow spring this year, which was perfect for planting,” Clint said. “And the season has gone well, producing some exceptional onions.” 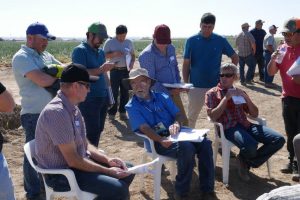 As part of the field day, Clint took the time to share with growers and dealers data and science behind station staff’s response to some days of heat this year. The talk included how monitoring stations were placed throughout the trial field, allowing the staff to check soil moisture conditions by mobile devices from “almost anywhere in the world.”

The stations allowed staffers to respond quickly to irrigation requirements and the timely response contributed to the overall health of the final product showcased at the event.

“The best part about these trials is that we are able to grow quite a few varieties from many different seed companies side by side,” Clint said. “When growers come out, they can easily assess what varieties might work for their operation.” 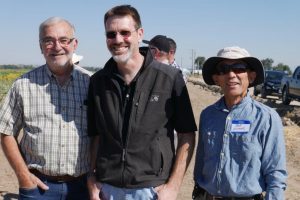 Incoming Station Director Stuart Reitz said that much of the credit for the beautiful onions on display goes to the dedicated personnel at the experiment station. “We are really blessed to have such talent and dedicated team members that did a phenomenal job this year to keep it all going,” Stuart said.

When asked about his new appointment as the director he will assume in November, Stuart said, “Clint has done such a wonderful job to build the program here, and we are all committed to keeping the good work going.”

Stuart said he’ll continue to be active in many Northwest research activities; he works closely with Tim Waters and his Washington State University research staff, and he is working on the Pacific Northwest Vegetable Association meeting and will participate in that event later this fall. 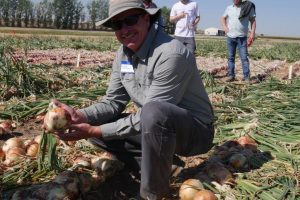 To gain a seed company perspective, OB’s Sherise Jones had a chance to visit with Enza Zaden’s René Emch.

“For us, the overall trial here in the Treasure Valley has been excellent,” René said. “We are extremely excited about our 10106 variety. It is a nice early onion for direct seed and transplants. It is bolt tolerant, has nice size and produces good single centers.”

René added that when he joined the Enza Zaden team, one of his focuses was to assist the company in building its onion program.

“It’s been a great experience for me,” he said. “I work with a dynamic group of people and we are definitely moving in a good direction with our onions.”

For the OSU Malheur Experiment Station’s Annual Reports and more, go to: http://www.cropinfo.net/

View photos of the many onion varieties included in the trial and the many faces that attended the event. Also shown here is a video of Clint Shock explaining the Malheur Experiment Station’s approach to onion trials in the Treasure Valley. And please check back next week when we will bring you all the details from the Washington State University onion seed trials from Prosser, WA. 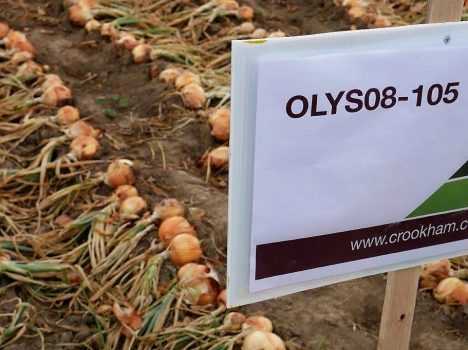