With a solid attendance at this year’s Pacific Northwest Vegetable Association Conference in Kennewick, WA, provided both informative sessions and great opportunities to network.

Executive Secretary Sheri Nolan said between 800 and 850 attendees were at the Nov. 20-21 event, and OnionBusiness.com’s Sherise Jones was among them.

Additionally, Sherise received a report from Columbia Basin Onion Research Committee Vice President Larry Bauman, which indicated a good turnout for the Nov. 19 meeting of that group as well.

Sherise said based on comments from those in attendance, the events were very successful.

At the PNVA Conference, Sherise chatted with Deron Beck with Seminis Seeds. “Deron said that his company is always very excited to attend the PNVA.”

He told her, “The sessions provide practical ways to approach growing and the information is always cutting edge.”

Sherise also had a chance to visit with John Rietveld with Rietveld Equipment who was exhibiting for the first time at the event and said, “It’s great to see so many producers in attendance. We have had good traffic and there seems to be a lot of interest in our company because we offer equipment that is ready and available in the US. The producers we’ve talked to find that very attractive.”

Also at the trade show was Norman “Snap” Keene of Eqraft, who was with his daughter, Nichol. The Keenes made the event a family affair this year, and Snap told Sherise the highlight at Eqraft’s booth was the Eqrader. PDF spec sheets for the company’s high-tech grading equipment are included here for download.

Seed companies and distributors were well-represented at this year’s event too, with Seedway bringing a large sales force to the event and Jerry Vosti from American Takii taking the time to capture a number of photos for their seed distributor booths.

While some suppliers hosted booths, others like Duane and Kris Kido from Top Air, Inc. maximized their time attending the sessions and networking with customers and friends.

The conference also served to recognize individuals who’ve contributed to the industry, and this year’s Friend of the Industry Award went to Lindsey du Toit of Washington State University at Mt. Vernon.

Lindsey, who is Vegetable Seed Pathologist and Professor/Extension Plant Pathologist, has an incredible curriculum vitae: She grew up in KwaZulu Natal Province, South Africa, where she completed her undergraduate education at the University of Natal, Pietermaritzburg (UNP) in 1991 with a major in plant pathology. She completed her MS (1995) and PhD (1998) degrees at the University of Illinois at Urbana-Champaign (UIUC), majoring in plant pathology and interned at the Plant Clinic of the UIUC for five growing seasons.

Her first position after graduate school was as the diagnostician for the Plant & Insect Diagnostic Lab at the Puyallup Research & Extension Center of Washington State University (WSU), from 1998 to 2000, after which she was hired as an assistant prof/extension specialist in veg seed pathology for WSU Mt. Vernon. She advanced to associate professor and professor, with a focus on veg seed pathology and management of veg seed crop diseases grown in the Pacific Northwest.

Over the last several years she’s been the recipient of numerous awards, including the Early Career Award of the Pacific Division of the American Phytopathological Society (APS) in 2006, the WSU Kenneth J. Morrison Extension Award in 2009 for outstanding contributions to the improvement of Washington State’s crop production, the WSU CAHNRS Interdisciplinary Team Award in 2012 for co-leading the Pacific Northwest Vegetable Extension Group (PNW VEG), and the APS Syngenta Award in 2013 for outstanding contribution to research and extension in plant pathology.

In 2017 she was elected as Vice President of APS (2017-2021 APS presidential team) and President in 2019. In 2018, Lindsey received the Alfred Christianson Distinguished Professorship in Vegetable Seed Science and this year was honored as Friend of Agriculture.

Also receiving formal kudos at the conference was Dan McClure of Walla Walla Organics. Dan was honored with a new award, that of Emerging Leader. According to Sheri Nolan, “Dan has been very dedicated to growing vegetables on his organic farm, from onions, spinach, kale, butternut, pumpkin and zucchini on a large scale for processing into juice and puree even for the restrictions of the baby food industry.”

He tends his organic acres and oversees production of organic vegetables “using the latest in cultivation technology, seeding and harvesting,” and he “has multiple certifications and is always striving to better his best farm practices.” Moreover, Dan “continues to contribute to the agriculture industry by being a good guardian of both soil and water management… [and] also stops and takes time to answer anyone’s questions on how he achieves the things he does on the farm.”

Our congratulations to Dan McClure!

And the Kennewick setting was also the site for the annual meeting of the Columbia Basin Onion Research Committee, which was chaired by Larry A. Bauman. Larry said the meeting was attended by several onion producers as well as WSU and Oregon State researchers and Alan Schreiber of Agriculture Development Group and Sheri Nolan of Ag Association Management.

During the meeting, a report on current balances from assessments showed a total of $47,000 for 2019. Larry said, “This is from the allied industry’s investment of $6,000 and the balance from the $5/ acre that various onion producers added for this current year.”

Several of the research people reported on their findings from their current year projects.

Following their reports, the researchers presented their proposed projects for the 2020 year.

“These projects totaled $35,381 and were approved by a vote of the board members attending,” Larry said. 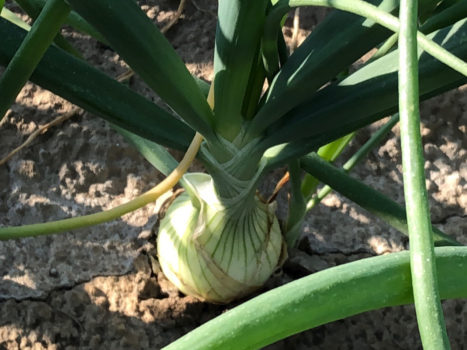