With the inclusion of Oregon’s Umatilla and Morrow Counties in the Washington Potato & Onion Association, onion grower/shippers in the Columbia Basin have a newfound voice in the industry.

According to Brenden Kent, general manager of Sunset Produce in Prosser, WA, the goal of the onion group is “to provide a platform for onion grower/ shippers in our area to discuss current challenges and opportunities in the onion industry.” Brenden added, “The onion industry in the Columbia Basin has never been able to come together as a group before now, and I think the discussions have been productive and we are stronger as a group because of it.”

Brenden added, “I am excited about the future of the onion group and being part of the WPOA, and I believe the industry as a whole will benefit from the strength of the shippers in our area.”

Concurring wholeheartedly with Brenden is Jared Gutierrez, general manager of Columba Basin Onion in Hermiston, OR.

He said, “We are now officially organized with the Washington Potato & Onion Association (WPOA), and it started with Brenden and I putting together a meeting back in June of 2018 informally with other grower/shippers in the Columbia Basin.”

That initial meeting, he said, brought a positive reaction and resulted in more meetings. In June 2019 the bond was formed and the two Oregon counties brought into the Washington association.

“Our area includes pretty much all grower/shippers in the Basin along with those of us that are in Umatilla and Morrow Counties in Oregon,” Jared said, adding that several onion grower/shippers are a part of the group with “more interested.” He said, “We have kept this to grower/shippers only, and those who are members represent the large majority of the onion grown in our area.” Officers for the onion division are Brenden, Jared and Jody Easterday of Pasco, WA-based Easterday Farms.

Serving as executive director of the WPOA is Randi Hammer. “She attends all our meetings as one of our officers,” Jared said. “Randi services both onion and potato in that capacity.”

Randi explained a bit about the Commission, saying the WPOA is a non-profit corporation founded in 2003. Its mission is “to promote the general welfare of the packers and shippers of potatoes and onions and allied industries in the state of Washington and the Umatilla & Morrow Counties of Oregon.”

She said the WPOA is involved in numerous areas on behalf of its members, including labor, politics, transportation and international trade.

WPOA board of trustees meets approximately three times a year, and the annual summer meeting is a three-day convention “where there is an opportunity to hear speakers on numerous topics, play a little golf and discuss concerns or current issues within the industry.” Next year’s convention will be held at Northern Quest in Spokane, WA, on June 7-9.

When asked what the mission of the onion contingent is, Jared said, “In short we wanted to create some unity with a more conscientious effort of working together to promote our area versus working against one another.” He said the long-term goal is to “have a stronger position in the market both domestically and internationally, along with a good self-awareness of our industry to provide a better management control along with good product/service that meets our customers’ needs.”

Jared said there are multiple benefits of being part of an association, particularly “the ability to work with each other versus being strictly competitive.” And he said, “Understanding that everyone has their own agenda an association gives us the opportunity to work more in unison to become a stronger, more viable market sector in the industry.” 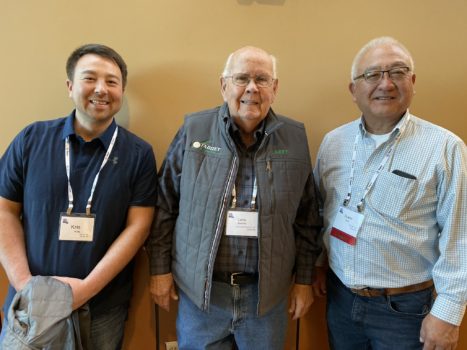