A referendum put before the South Texas Onion Committee in August of this year met with 100 percent approval from committee members to amend the federal marketing order, reducing the size of the committee through a phase-out of seats beginning in the 2019 season.

According to Dante Galeazzi, manager of the Mission, TX-based committee, streamlining the organization will be done to assure fairness is maintained in representation. Thirty-five counties are governed under Federal Marketing Order 959, he said, and since its establishment in 1961 it has been made up of two districts, with a total of 10 producer members, seven handler members and alternates for each. With the change, one grower, one handler and their alternates will be phased out for each district.

The USDA announced the change Nov. 8, noting, “The amendment also makes conforming changes to the selection process and the procedures for meetings and voting to reflect the reduction in committee members.” It continued, “In a referendum conducted Aug. 6-27, 2018, the amendment was favored by 100 percent of voting growers, representing 100 percent of the total volume of onions produced by those voting. For the amendment to pass, it must be favored either by at least two-thirds of the growers voting in the referendum or at least two-thirds of the volume represented in the referendum. Both requirements were met.”

In the current structure, South Texas Onion members serve a two-year term of office that begins Aug. 1. Terms of office are staggered so that approximately one-half of the committee is elected each year. Producers nominate producer members, and handlers nominate handler members. Usually, two nomination meetings are held in District 1 (Coastal Bend-Lower Valley) and District 2 (Laredo-Winter Garden). Both handlers and producers are nominated at each district meeting.

“Over the years there has been a lot of consolidation,” Dante said of the South Texas onion industry. “Back when the marketing order was established, there were a lot more growers and handlers.” With fewer participants and crop diversification demanding more time from growers, finding members who were able to serve the two-year terms on the committee became more difficult, he added.

The phase-out will begin with the alternates, and Dante said the committee is looking for new members to fill the six open seats this year.

In describing the South Texas onion deal, which is primarily sweets that are generally shipped from early March to mid-July, Dante said that as grower numbers declined, acreage also fluctuated to some degree.

A final rule implementing the amendment will be published in the Federal Register, and the industry will be notified when it is published.

On the AMS 959 South Texas Onions web page, which can be viewed at https://www.ams.usda.gov/rules-regulations/moa/959-south-texas-onions, the Order Authority and Regulations notes, “The marketing order authorizes quality regulations, research and promotion programs, and markings, pack and container regulations for onions grown in South Texas. The order took effect on Jan. 25, 1961 and was last amended under formal rulemaking on Feb. 29, 2008. View the full regulation.”

The page goes on to describe Quality Regulations, stating, “The marketing order authorizes grade, size, maturity, and quality regulations to maintain onion quality shipped to consumers. These requirements established for onions also apply to imported onions from early March through early June each year due to 8e requirements.

That subtopic says, “8e requirements specify that imported commodities must meet the same or comparable minimum grade, size, quality, and maturity requirements, as those specified under this marketing order. Learn about Importing Onions.”

Research and Promotion are explained as well: “The order authorizes production research and marketing research and development projects. These programs are currently in effect.”

And about Pack and Container Regulations, the order “authorizes regulations on the size, capacity, and weight of the containers used to ship onions to market. These regulations are currently not in effect.” 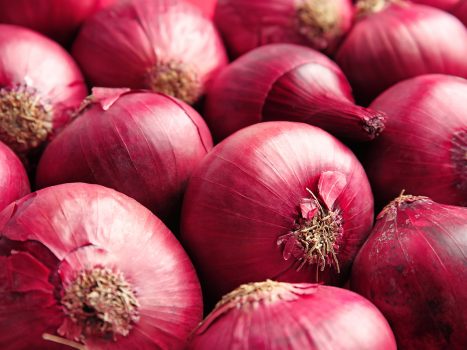