Born in California and raised in Utah, Owyhee Produce’s recently hired sales executive, Angela Williams, is new to the Treasure Valley of Idaho-Eastern Oregon and to the onion industry, but she brings familiarity of the region and a strong background in sales with her to the job.

“I was born in Walnut Creek, CA, and raised in Utah,” Angela told OnionBusiness this week. “I attended Brigham Young University and just moved to the Treasure Valley area four months ago.”

Her connection to the IEO region is her husband, Don, who grew up in Nyssa, OR, and whom she met at WordPerfect. And her sales experience was founded in computer software at “WordPerfect Corp. when their DOS 5.1 version came out,” she said, adding, “Yes, this dates me.” Prior to joining the Owyhee Produce team, she sold email archiving software as well as backup and forensic programs.

“My father-in-law still lives here,” Angela said of family ties to the region. “I had been coming to Nyssa for almost 30 years and always enjoyed visiting. My husband wanted to move back home, or at least to the area, for a number of years and me, well, I always liked the idea of getting out of the city. Then in July of this year the opportunity to move became available — and we took it. Shortly after the move, a sales opportunity opened up here at Owyhee Produce. I interviewed, and the rest is history.”

Though she described her background in agriculture as limited – “I don’t have any produce experience other than eating it and growing some in my backyard in Utah,” she joked — her sales skills are translating well from the computer industry to onions

“A big part of my job [in computer software sales] was developing a channel sales team,” she said. “Basically, [that was] working with and training partners in the United States, Europe, Asia and Africa to sell our software. I had developed life-long friends all over the globe and really enjoyed that part of my job.”

She said the sales position at Owyhee is a good fit. “I really enjoy it, and the Owyhee team has just taken me in as one of the family,” she said. “Although the product is very different from what I sold before, the people aren’t. And they are still the best part of my job.”

She continued, “Sales always comes with its own set of hurdles, and produce is no exception. It is challenging, but there’s never a dull moment. Every day is different, and I like that.”

Angela added, “I really like working with great people and developing long-term relationships. Owyhee has grown a lot in the last 10 years, and I look forward to helping and seeing it grow even more in the next 10 plus years by being a part of a company that provides great products and service.”

The family members are all animal lovers and love to travel, and Angela said they have trained puppies as guide dogs for the blind. 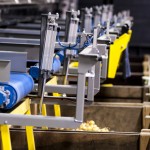