For more than three decades the driving forces behind Emmeloord, Netherlands-based ERCmachinery have been designing and manufacturing equipment specifically for the onion industry, starting with a European customer base and expanding over time to service markets in North and South America, the Pacific Rim and Africa.

Year 2017 brings the operation into an even larger arena, with ERC teaming with Qreenno advisory and engineering services in the Netherlands as well as Propak, also from the Netherlands and specialized in building weighers and packaging equipment, to form Eqraft. The merger, according to eqraft.com, “embraces the future” by designing, building and maintaining processing solutions for onions and other dry edibles produced globally.

“Our craftsmanship stretches from consultancy, design and assembly, to complete mechanization, automation and continuous improvement thereof,” the site says.

The focus, although global, will maintain the tenets of ERCmachinery, which company partner Gerard van der Knijff explained is to customize the machinery to onion-producing regions and the varieties grown there.

Van der Knijff and his brother, Arie, have held to that formula since ERC’s earliest days, recognizing the onion as the complex product it is.

In fact, the company’s web site, www.ercmachinery.com, states, “Onions are treated and handled differently in a country, for example, like Finland, where their techniques are very different from those in a place such as, say, Puerto Rico. We have made it our business to know and understand these differences, and, as a result, we learn something new every day.”

Gerard told OnionBusiness.com recently, “We provide customization of the onion line for the country/area where it will be used. This starts with seeing the manufacturing process as ‘from field to fork.’”

He explained, “There are differences in product. For example, the Netherlands produces long day onions in a mild climate that comes from the Gulf Stream. “One onions handle very easily and keep well,” he said. “But if you go into Germany, France or Austria, you’ll find land climate grown onions that need more care in handling. In Finland the onions form less skins because of that country’s short growing season, and in Spain the onions are very big and can bruise easily.”

Therefore, ERCmachinery builds lines for early crops that will deal with wet product and dirt in the system as well as for crops that are meant for storage. “We can quickly grasp the parameters and help our clients not jump in the wrong direction,” van der Knijff said.

The brothers’ familiarity with onions goes back two generations, although neither of them had growing experience. Arie’s expertise stems from a background in welding and mechanical engineering that led to equipment manufacturing, and Gerard started his career as an electrical engineer, with some international experience in Israel and the United States.

It was actually their grandfather who was an onion grower near Rotterdam located in southwest Holland. Their father grew up in the farming region and later moved to the northeastern part of the country, becoming an engineer. As it turned out, many parishioners in the family’s church had also moved from Zeeland.

“These people were true onion packers in Zeeland,” Gerard said. “That’s how our family got reconnected with onions.”

Ultimately Arie and Gerard started ERC in 1994, and they remain business partners today. In recent years a capital shareholder also became a partner enabling further growth. The company’s timeline includes many milestones, such as the first integrated and fully enclosed onion topper built in 1995 and the first export to the United States in 1997. In 2005 ERC, in cooperation with LCpackaging, introduced the BaxMatic packaging system. The latest milestone is the introduction of the electronic grader, which will be a corner stone for the future product line,

“We want to continue to grow in the onion industry and also continue to diversify,” he said. The toppers and sizers are complemented by packaging and weighing equipment, and Gerard said Eqraft is capable of “making the jump to other markets,” providing service to a variety of dry edible handlers.

The web site notes, “ERC machinery manufactures machinery for mainly large-scale mechanized producers and handlers of dry onions, green top onions, shallots and onion sets. Our customers, whether they are professionals who handle 500 tons a day or the smaller scale specialist, share one thing in common – they both pay strict attention to efficiency and quality.”

Gerard said Eqraft promises to build on the quality and service now provided. “This week our own electronic onion sorter commenced production at our client. I never through we’d make that jump, but with the right driving forces and partners it became a reality. It’s a new day and a new era.”

The company also promises individual communication. “Whether we deliver just one machine as a component to an existing production line or a complete, state-of-the-art, turn-key onion line itself, we take into consideration the markets wherein our client operates,” the web site says. “We place strong value in considering your whole process and your unique ‘onion world.’ Our goal is to help deliver ‘from field to fork’ and to design and deliver the optimal solution for you.”

For info go to: www.ercmachinery.com 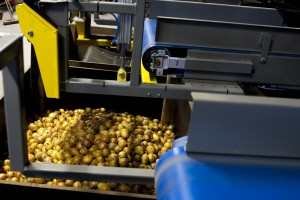 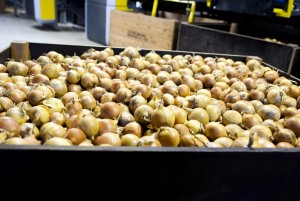 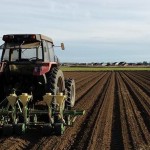