For James Johnson with Carzalia Valley Produce in Columbus, NM, the decision to pre-order two robotic weeders from Carbon Robotics for 2022 was an easy one after seeing a prototype in action in his fields for several months this past winter.

James, who’s a longtime contributor to OnionBusiness’s crop update, said equipment from the Seattle-based U.S. company holds great potential for decreasing labor needs and increasing efficiency. And, he said, the team who remained on-site at Carzalia during the testing sealed the deal with their commitment.

“I beta tested for four months over the winter, so essentially I got to watch the machine progress from a sit to a scoot to a crawl,” James said of the robotic 24/7 machine. And, he added, the constant attention and modifications that upgraded performance during that beta period was done “in such a way and so quickly though that I signed for two machines for my 2022 onions.”

James is among a small group of onion grower/shippers to have trialed the Autonomous Weeder, with the equipment finding favor in Idaho-E. Oregon, Washington and California. With onions planted in both New Mexico and Mexico, the Carzalia season this year will kick off the last week of April in Delicias, with onions in Chihuahua expected to start mid-May and then late May in New Mexico – multiple crops that call for weeding and labor. And labor is increasingly difficult to secure.

The concept behind Carbon Robotics is straightforward, and its website, https://carbonrobotics.com/, explains that the young (founded in 2018) company is “pioneering the next revolution in agriculture through the deployment of autonomous robots.” Robots decrease the need for seasonal workers, and the process also mitigates input costs.

The site explains, “Carbon Robotics’ robots are purpose built to tackle one of the industry’s biggest problems: weed control.”

Carbon’s team, James said, is seriously dedicated to that singular cause… so much so that while they were in New Mexico over the winter, they were – figuratively and literally, laser focused.

“These guys worked so hard at it that I really had to force them to stop and join us for both Thanksgiving and Christmas dinners,” he said.

At the helm of Carbon is its founder and CEO, Paul Mikesell. His bio on the website notes that he has “deep experience founding and building successful technology startups,” having co-founded Isilon Systems, a distributed storage company, in 2001. That company went public in 2006 and was acquired by EMC for $2.5 billion in 2010. In 2006, he co-founded Clustrix, a distributed database startup that was acquired by MariaDB in 2018.

And prior to the launch of Carbon in 2018, Paul served as Director of Infrastructure Engineering at Uber, where he grew the team and opened the company’s engineering office in Seattle, later focusing on deep learning and computer vision. He holds a bachelor’s degree in computer science from the University of Washington.

Alex Sergeev is chief technology officer at Carbon and leads its company research and computer vision teams. Before joining Carbon, he held multiple engineering roles at Uber, developing and deploying “the machine learning models and infrastructure used by Uber’s AI, self-driving, and maps teams,” his bio says. He also worked on Microsoft’s Bing Data Mining team and built the metrics platform leveraged by the A/B experimentation solution. Alex holds a master’s degree in applied mathematics and informatics from the Moscow Engineering Physics Institute.

Nick Kirsch is director of software for Carbon and leads the software and electrical teams. Before coming onboard at Carbon, Nick was founder and CEO of atsu corp, “a technology startup focused on challenges in large-scale computing environments.” And prior to that, he spent 13 years at EMC Isilon “in a variety of engineering, product, and executive roles.” Nick holds a master’s degree in computer science from the University of Washington and a bachelor’s degree in mathematics and computer science from the University of Puget Sound.

The website shows a group photo with fewer than 20 Carbonites, testimony to the team effort.

And the product, James Johnson said, continues its evolution at a surprisingly fast rate. From the “sit to scoot to crawl” was accomplished in a matter of months, and in mid-April he told OnionBusiness, “I think now they are truly at a walk and will soon be at a run. The engineering team was unlike any other I’ve ever been around. It’s easy to be confident in the product when you have that much confidence in the people.”

How the equipment does its job is science fiction for old-timers and impressive to younger growers. The Autonomous Weeder runs around the clock, using “GPS and computer vision guidance system to stay within the bounds of your field, navigate furrows, and automatically turn around for the next row.” It also knows weeds from crops.

“High-resolution cameras scan your field, crops, and weeds in real time. A rugged, onboard supercomputer uses machine learning to identify invasive weeds (green) among your valuable crops — in milliseconds — all while rolling.” And when those weeds are IDed, high-powered lasers “target thermal energy at each weed’s meristem. The Autonomous Weeder can kill over 100,000 weeds/hour using eight simultaneously operating laser modules that deliver quick zaps on emerging weeds.”

That reduces the need for chemical weeding methods, and the process is certified organic by the Washington State Department of Ag.

“The Carbon Robotics Autonomous Weeder offers groundbreaking technology and is designed for row crops with 200 acres to tens of thousands of acres. A single robot will weed 15-20 acres per day and replace several deployments of hand-weeding crews. Since its founding in 2018, the company has worked closely with farmers to develop its technology, which supports effective and efficient weed elimination for both conventional and organic farmers. The robots have undergone beta testing on specialty crops farms, working on fields with a variety of crops, including broccoli and onions,” the site explains.

Of course, the most obvious immediate benefit is labor reduction, with H2-A work visas and COVID snarling the thread of field labor for many farmers.

The website notes, “Automated robots enable farmers to reduce the highly variable cost of manual labor as well as reduce the use of crop inputs such as herbicides and fertilizers. Labor is often farmers’ biggest cost and crop inputs account for 28.2% of their total expenses. Reducing costs in both these areas is a huge benefit.”

We asked James what labor reduction he thought he’d see with the Autonomous Weeders he has on order for 2022.

“This is where we still have questions, how fast can this get,” he said. “The AI in the machine will improve exponentially, and that will make it more and more efficient. We think we can reduce weed labor in half immediately. It really depends on weed species and pressure at each individual farm.”

He added, “The version we had was half the computers and half the lasers of the current model. Our model is now retired to being a test model where they can further refine the autonomy, I believe.”

And, James said, “We saw the potential right away and realized that as an early adopter we have our name on the list. There will be a point, in my opinion, where demand will outpace production availability, and I don’t want to be the guy wishing I had one.” 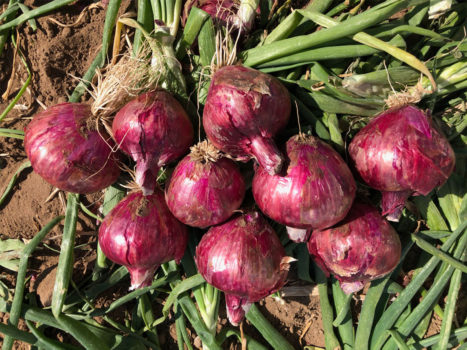