Some onions from California’s Imperial Valley have already shipped, and more will start shipping next week, according to several OnionBusiness contributors involved in that deal.

John Vlahandreas with Wada Farms reported on April 21 from Troy Caston Farms in the Imperial Valley. “We started loading last night,” he said. “It’s been flawless. The equipment has operated perfectly, and we brought in 500 bins. It’s windy now, and the onions are drying off and will be in good condition for packing.”

He continued, “We’ll start running yellows on Monday night, April 26, followed by whites and reds. On Friday night, April 30, we’ll start up our new bagging and stickering equipment, and by the following Friday we’ll be running full steam.”

John talked to us about this season’s crop. “We’ve had an outstanding growing season. The yields should be excellent, and the quality is spectacular! We are really excited to get going,” he said.

Mike Smythe with West Valley Packing and Joe Heger Farms in El Centro told us on April 21 that they are going now.

“We started and are pushing organic yellow and reds first,” he said.  “Pricing is up from last season and demand has been strong.  We will pack some flat sweet yellows and hopefully some flat reds later this week.  The weather has given us a break, and we are expecting below normal temps through next Tuesday.” He went on to say, “We started some conventional whites yesterday, and we’ll have some yellows and reds later this week.  With this weather there isn’t any need to push.”

Mike commented on the labor situation, saying, “Labor is tight, and we have some good yellow varieties and hope to machine harvest most of our yellow onions to offset the higher minimum wage and shortage of people.  We are hand clipping some yellows for those customers who want hand clipped.”

Also, Mike said, “We have a full time USDA inspector on site. With high freight rates it is important to ship quality from start to finish.”

Many thanks to Mike for the great photos and video he sent to accompany his comments this week.

Trent Faulkner with L&M Cos. in Raleigh, NC, reported on April 20 that the company’s Calipatria deal is getting ready this week.

“Derek Ennis is flying out today, and we are getting ready to get going,” Trent said. “We’re harvesting this week and letting onions dry off. We’ll go in on Monday to take a look, and we could start packing then, but Tuesday, April 27, is the firm start date.” He continued, “We’ll start with yellows and white, and by May 1 we will be going full steam with all colors and sizes.”

Trent said a good season is expected. “This season we’ve had excellent growing weather,” he said. “Unlike last year, we’ve seen very few fields with seeders, and the onions look to have great quality and sizing.”

When asked what he expects out of the gate for the market, Trent said it’s hard to tell.  “We’re encouraged that we’ve been getting calls this week, and it’s nice to be getting calls rather than be making them. But here at the very beginning, I don’t expect the foodservice guys to come down right away with what they’ve been shipping out of the Northwest. But retailers probably will, and there are wholesalers that might be looking for a switch too.”

And, he concluded, “When it comes to forecasting the market, you really don’t want to speculate until you get going because you never know what’s going to happen until you get there. I do know, in terms of quality, we should have an excellent season.”

Robert Bell with Western Onion said on April 21 his plan is to start by Wednesday, April 28. “That’s our tentative kick-off,” he said. Robert told us he’ll start with reds and whites. “We’ll send them to Bakersfield for cold storage, and about a week to 10 days after we start them, we’ll start yellows.” The onions, all organics, will go through mid-May, he said.

“Bakersfield will start mid-June for us, and we’ll stay there until August and then go west,” he said. 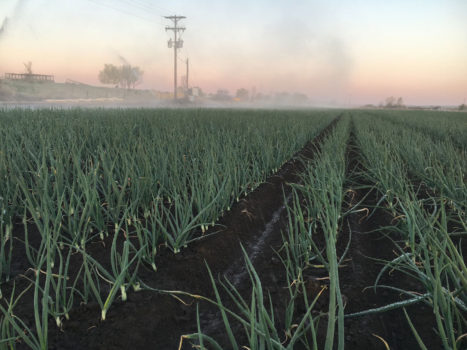