B. Otani Farms a fourth-generation portrait of loving the land

When Bryan Otani’s great-grandfather moved from Japan to Hawaii many decades ago, he put his homeland farming knowledge to use right away and fed his family with the sustenance crops he raised.

Today Bryan, who heads up B. Otani Farm in the Kula district of Maui, continues that heritage with green beans, broccoli, multi-colored baby carrots and the popular Maui Kula sweet onion. Attendees of the recent NOA Convention in Maui were given a tour of Kula and the 45-acre Otani Farm.

“He grew potatoes and cabbage, those kinds of vegetables,” Bryan said of his forebearer, noting the livelihood was passed down to his grandfather and then to his father, Paul.

“My grandfather grew crops to sell,” he said, explaining the farm produced now only food crops but also floral.

When Paul headed up the operation, his primary focus was cabbage “and some onions,” Bryan said. The varieties both came out of Texas – the Granex 33 and the Texas 1015 – and there were 20-23 acres farmed at that time.

“My father still helps out,” Bryan said of his “retired” dad. It’s a year-round operation, with Maui Kula sweets shipping from April through January and other items running 12 months.

Like other sweets, the all-yellow Maui Kula pull their characteristics from the soil and the conditions. “We have warm days and cool nights,” Bryan said of the darn-near perfect Maui climate. And of course there’s that volcanic soil that onions find so welcoming.

“We grow from direct seed, transplants and sets,” he continued. “And we hand plant and hand harvest most of it.” A vacuum planter is used for the direct seed.

Hands-on care is practiced at every level of the farm, and the plant has a Kerian sizer. Bryan said the onions are packed in random weight mesh bags and 50-pound sacks.

We asked if more automation is something he’s considering, and Bryan was forthright in his answer: “For the acres I have, it’s hard to automate.” But he said he looks at equipment regularly and “gets ideas.”

Most of the onions stay inside Hawaii, with a portion going to California receivers. Bryan is also working to establish relationships in Japan, he said. The primary market is foodservice through wholesalers/jobbers. 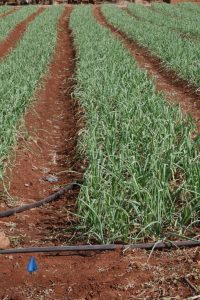 One of only about a dozen onion growers in Hawaii, Bryan Otani said he believes American-grown produce is the best, and he’s fully committed to providing just that.

He and wife Melissa have three offspring; sons Ty and Drew are 16 and 13, respectively, and daughter Trista is 11. When asked if his children will carry on the family farm, Bryan said it’s possible, but he stated that their futures are their own to choose.

It’s a wise parent who weighs both pros and cons and shares that information with his children, and Bryan Otani said while his production season is steady year-round, paradise is not immune to the issues facing farmers across the continental United States.

Just like his farming counterparts in here, Bryan is hard-pressed to find labor.

“We are competing to get workers that would rather work at the resort,” he said. Right now the farm has about eight full-time employees who work all the crops.

But he’s also like virtually every other American farmer in his optimism and dedication, continually eyeing growth and looking at options. One avenue he’s considering is organics, and lifelong farmer Bryan Otani said, “I’m not ruling it out. I think it’s good.” Stay tuned. 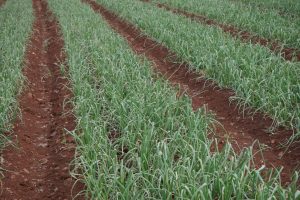 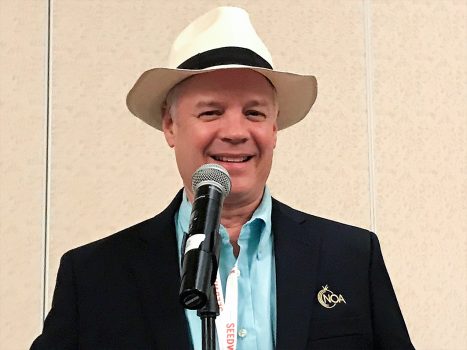