The merger has been in the works for more than a year with management teams discussing the creation of a combined facility, and construction began shortly after both longtime onion shippers based in Ontario made the plans public. The new company became official on July 1, and during the interim workers erected the finished product/packing structure and installed European-designed and manufactured grading and packing equipment in an existing building at the Baker Packing site.

What the new operation brings to the table is significant, with increased ability to grade, pack, palletize, wrap and ship well over 4,000 bags an hour.

In early June OB sat down with Baker & Murakami principals Steve Baker and Jerry Baker of Baker Packing and Grant Kitamura of Murakami Produce, and the men explained the philosophy behind the joining of forces as well as the reception from the combined customer base.

“Our ethics, our morals and our business practices are very similar,” Jerry Baker, founder of Baker Packing, said. Steve Baker, Jerry’s son and also president of Baker Packing, said the two operations, though competitors for decades, have always shared mutual respect and have worked together for the common good of the industry.

He added, “We are very proud to be partnering with Murakami Produce.”

Kitamura agreed with the Bakers, saying, “I’m really happy and proud to partner with these individuals. And I’m very pleased with Jerry’s entrepreneurial spirit.”

He continued, “We have much in common as individuals – we didn’t inherit these businesses. We built them.”

Noting that keeping current with technology has been key in the choice of equipment, the three men gave props to two individuals who were instrumental in setting up the new equipment.

“Jerry Mackey, our production manager, is the best in the business, bar none,” Steve Baker said. And Kitamura said Cameron Skeen, director of operations and business development at Murakami, “has done a lot of legwork” in the selection of equipment.

In addition to the grading and packing attributes, the new line can also electronically size onions with an accuracy of within 1/10th of a millimeter. It can also create “customer-specific recipes” to deliver a high level of consistent product types.

The electronic grade can take high-res photos of every onion and identify any blemishes. It can also grade onions for internal quality — internal decay, seed stem, or sprouts. The camera can see it, and that product can be removed.

And the high-speed automatic scales and baggers make for a more consistent pack weight, and the facility has high-speed, fully automated palletizers and wrappers.

Historically, both operations have seen steady growth since their foundings. Murakami Produce was started by the late Sig Murakami as the onion packing and shipping division of Murakami Farms in 1969. That family-operated farm ceased operations in 1983.

Kitamura, who has been with the company since 1980, said that the company entered into a joint venture for sales with Idaho Falls-based Potandon Produce in 2006. Eight years later, in 2014, a six-farm Treasure Valley group consolidated as Murakami Growers LLC and became part owners of the company.

Baker Packing’s history goes back to 1972, when Jerry Baker started an onion division for DeBruyn Produce. The operation was initially housed in a 7,200-square foot warehouse in Ontario, and the present company sits in the same location. Steve joined DeBruyn in 1984, and the two men purchased and renamed the company Baker Packing Co. in 1997.

“This new operation allows us to do twice what we each did in an eight-hour shift,” Steve Baker said.

And Kitamura said, “Customer-wise, the reception has been very positive. Our growers are excited, too. It’s all positive.”

Photos listed are of Baker & Murakami’s new line construction as of June 29, 2017.  Updated photos will be published in the July edition of the OnionBusiness.com InPrint Magazine, which will be mailed next week. Join our mailing list. 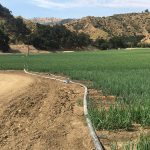 Market and Crop Update for July 13