The Oregon House of Representatives passed a $5.3 billion transportation bill on Wednesday, July 5, and the bill went on to senate ratification the following day. The next step is the governor’s signature, and Oregon Gov. Kate Brown has pledged her support, noting in a July 6 tweet, “Proud and grateful of all those who worked tirelessly on the transportation package. I look forward to signing this critical bill.”

Passing the House by a 39-20 vote, the measure was approved July 6 in the Oregon Senate by a more decisive vote of 22-7, which exceeds the three-fourths vote necessary to increase taxes.

Oregon Rep. Cliff Bentz, R-Ontario, one of the framers of the bill, told OnionBusiness on Tuesday, July 11, that Gov. Brown is expected to sign the bill into law later this month when all of the committee members have returned from vacation. “She wanted the members present when she signs it,” Bentz said, noting the bill was “not something dreamed up overnight but more like over the last 10 years, with a lot of work done on it in the last year or so.”

Bentz, who is meeting with area stakeholders Thursday, July 13, said of the $5.3 billion total price tag, more than $25 million is to go to a trans load facility in Malheur County – something the Treasure Valley onion and ag industries have supported.

In addition to HB 2017, Bentz was also the architect of HB 2012 that creates an Eastern Oregon Border Economic Development Board – an entity considered crucial to expanding the region’s economical development and a vehicle to deliver loans and grants to eligible recipients. That measure passed the House on July 5 and Senate on July 6 as well.

Bentz said he and Oregon Rep. Greg Smith (R-HD 57), both of whom are on Oregon’s Joint Committee on Transportation Preservation & Modernization, have participated in discussions of an intermodal transportation hub in the Ontario/Nyssa/Vale area of Eastern Oregon, and he said three sites are being looked at. As far as a timeline, he said funding could be available in 18 months.

“The transportation hub is driven by where [stakeholders] want it to be located, what it is to look like and how it will be built,” he said. Noting that the “conversation has been ongoing for a decade,” Bentz said, “It really took form in the last three or four years. It’s moved by the recognition we had to do something to move products out of the area. Trucks can’t come in empty and leave full. It’s not feasible.”

He continued, “The challenge presented by the wider Panama Canal and major competition in Washington State with their [longstanding] freight advantage makes the transportation hub very valuable because it lets us compete by moving freight at a lower cost to receivers east.”

Photos of the Week – California 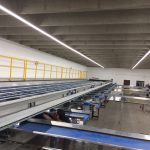