Like his father before him, John A. Calandri has been farming in the Antelope Valley north of Los Angeles for decades. In fact, the Calandri family has grown onions and other crops for most of the past century, and though changes in farming, packing and shipping have been remarkable, even more notable is the fact the family remains steadfast not only in its traditions but also in its proclamation of the Christian faith.

“My grandfather started John Calandri Farms in the 1950s,” Brandon said. “Eventually my dad [also named John] wanted to start his own farm, which he did in the early 1980s.”

John Calandri Jr.’s Christian beliefs led him to the company’s name, SonRise, and he also had the idea for the logo, which depicts furrowed fields in the foreground and three crosses in the mid-distance, set against a mountain sunrise.

In 2003 John Sr. passed away, and the acreage that had remained in John Calandri Farms was transitioned to SonRise, Brandon said.

Onions are primary, but the company also raises carrots, potatoes and garlic for contracts.

Another aspect of SonRise that sets the company apart is that 95 percent of its onions are grown for retail and 5 percent for foodservice.

“We found our niche with this split,” Brandon said, adding that SonRise plants for retail sizing and works direct with more than 30 chainstores across all of North America. It also sells onions to receivers in South America, Australia and the Middle East.

Shipping onions 12 months, SonRise works in partnership with growers in several growing areas. “We have a partnership in Mexicali this year, and we also have growers in the Imperial Valley, Coachella Valley, here in the Antelope Valley and in Quincy, WA,” he said.

He summed up the closeness of the partnerships by saying, “It’s important to stick with like-minded people.”

New-crop onions from California will start shipping in four to six weeks, he added.

As for the varietal split, SonRise is heaviest to whites, followed by reds and yellows. The company has a sweet program, and it also grows certified organic onions, with reds making up the majority of organic volume.

“We can run 100 tons per hour in Lancaster,” Brandon said. “We also pack out of the Imperial Valley and out of Quincy.”

“My dad is working toward retirement in the next 18-24 months,” Brandon said, explaining that John Calandri is more comfortable in the field than at a desk. “He and I head up the grower side of the company,” Brandon said.

SonRise is “completely vertically integrated, with our own trucking company.” John Sr. bought trucks in the 1970s, which “opened the door for us to work direct with chains.”

Brandon said changes in the industry over the last decade have been “amazing, from drip irrigation to GPS to automation in packing plants, which plays an interesting role now that labor is harder to get.”

Changes are bound to continue, Brandon said… at least on the tech and farming side.

And though challenges will come as surely as the star at the center of our solar system will rise each day, one can only imagine faith and tradition, rock-solid tenets of SonRise Farms, will prevail. 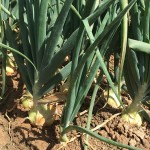