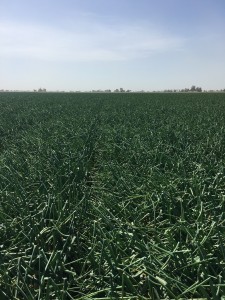 Steve Gill with Gills Onions in Oxnard told OnionBusiness.com on March 22, “We are expecting to start harvest April 10 to 5. The crop is maturing well with a lot of onions on the early fields at three inches in diameter. They are growing fast with the above-normal temperatures we have had this season in the Imperial Valley. We have a lot of interest in fresh crop onions, too.” (headline image supplied by Steve Gill, Gills Onions)

Brandon Calandri at SonRise Farms in Lancaster said that company will have new-crop California onions in four to six weeks. SonRise, which grows in Antelope Valley, partners with growers in the Imperial Valley and also with growers in Mexicali, Mexico, and in Quincy, WA.

Parma, ID-based J.C. Watson Packing Co. will begin shipping all colors and sizes out of Southern Cali at the end of April, according to Kent Sutherland. He said the quality of the crop looks great.

Kathy Fry-Trommald of the Walla Walla Sweet Onion Marketing Committee told OnionBusiness.com this year’s Walla Walla crop is in the ground, and after a mild winter growers are expecting to harvest in early June. “It’s a typical year so far, and we are rolling along,” Kathy said. The Sweet Onion Festival is slated for June 18 and 19 in Walla Walla.

Gurda Produce in Pine Island will start planting its 2016 onion crop on April 1, and Michelle Gurda said there have been no weather delays. She said the program will be 200 acres again, with 20 percent reds and 80 percent yellows.

Onions are in the ground now, and growers for Snake River Produce in Nampa, OR, will finish planting around the same time the shed wraps up its shipments for the 2015 crop, according to Tiffany Cruickshank. “Our growers will finish planting in late March or early April,” she said. “There are some onions up now, and we will have plenty of onions next year.” Tiffany said growers on the Owyhee Ditch will get three acre feet of water, up from last year.

Kent Sutherland at J.C. Watson Packing Co. in Parma, ID, said planting is underway and on schedule, and he reported the operation has kept its acreage the same as last year.

Interested in the weather for a variety of onion growing areas? Visit our weather links page. Click Here 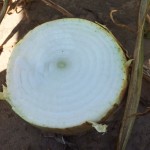