History-rich Carzalia Valley Produce, which recently aligned with Utah Onions in an exclusive sales agreement, has seen more than a few changes since 1912 when W.R. Johnson Sr. ventured from his Floresville, TX, home to the far south of New Mexico.

W.R. came looking for new ranchland at a time when New Mexico was in its statehood infancy and Pancho Villa was in his revolutionary heyday. In fact, a couple of years later Pancho would raid and then burn the nearby high desert town of Columbus.

But turn-of-the-century drama and politics aside, W.R. found the area to his liking and, in 1918, moved his cattle operation from the San Antonio region to a sprawling Carzalia Valley ranch within eyeshot of Mexico.

“At that time,” great-grandson James Johnson told OnionBusiness.com, “it was strictly cattle. It wasn’t until the drought of the 1950s that we began growing crops.”

An irrigation well was drilled in the 1950s, moving the Johnson family in a new direction that included onions, and James said, “We are still ranching and farming on one of the original purchases.” It was named, appropriately, Carzalia Valley Produce. 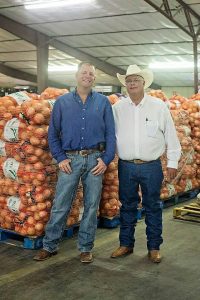 James is the fourth generation of Johnsons to work the land, and his sons, Taylor and Walker, will be the fifth. His grandfather, W.R. Jr., and his father, W.R. III, began the onion operation. Jr. was active in the New Mexico Dry Onion Commission, and W.R. III, or Bill to everyone who knows him, is still a part of the organization.

Several hundred acres of the farm are devoted to yellow, white and red onions that begin shipping in May and run through late summer. Carzalia Valley also produces pecans, and James’s brother, W.R. IV, heads up that side of the business. James and Bill are the onion men, and Connie, mother of James and IV and wife of Bill, is in the accounting office.

Family traditions and the commitment to ethical land stewardship are key to Carzalia Valley, and while onions make up a large and longstanding portion of its business, the alliance with Utah Onions is a new cog in the wheel. It’s a change that came with the company’s new direction, James said. He added that the Syracuse, UT, company will handle 100 percent of CVP onion sales going forward, with exclusive rights to market and sell the Carzalia Sweet along with the full line of consumer packs, bulk and cartons.

Prior to forming the partnership with Utah Onions, Carzalia Valley Produce worked with L&M Cos., and James said, “We were with L&M since their acquisition of Griffin-Holder [in 2010], and I very much respect them. We simply found ourselves headed in a new direction.”

The change complements Johnson traditions, as do Carzalia Valley’s ongoing upgrades in equipment and technology.

“We’ve moved into a new era,” James said. “We’ve taken a lot of organic principles and applied them to conventional farming. Cover crops add biodiversity to our soil, and we’re trying to keep green root in the ground.”

He said that western soils are low in organic matter, and by maintaining the cover crops Carzalia Valley is able to bump up its organic matter percentage. Among the crops used are daikon radish, canola and a rye grass blend. “It’s a low-cost way to build up the soil health,” he said.

Another advancement is drip irrigation, which was introduced to some fields in 1999. “In the last three years we became 100 percent drip,” James said.

This year, though, much less drip has been needed. “We’ve been extremely blessed with rain,” he said. “We haven’t run water since Thanksgiving except to supplement the new planting.”

As far as farming equipment, “We’re looking at drones for crop health monitoring, and our tractors are all GPS. Our tractor passes are 10 percent of what they used to be, and this year we’ll be at 80 percent mechanical harvest.”

Planting is mostly pelletized seed, with 95 percent of the crop direct-seeded and overwintered. There are also spring-seeded and transplant onions that go in for later harvest.

The varieties, James said, are the flagship Carzalia Sweet, an intermediate day summer variety that is planted between early January and the third week of February and harvested between July 4 and Aug. 10.

“The earliest onions are an overwintered New Mex variety developed by New Mexico State University,” he said. Those begin in mid-May.

Carzalia Valley is heaviest to yellows, and James said 60 percent of the volume is considered sweets. With sales to both foodservice and retail, the farm shoots for mediums and jumbos. He added, “We see ourselves going more into retail markets.”

As with the entire onion deal, “This year everything looks to be early, which generally means bigger onions,” James said.

The operation is third-party audited by Primus and is GlobalGAP and GFS certified.

Check out awesome photos of the Johnson family and the Carzalia Valley Produce, Inc. operation: 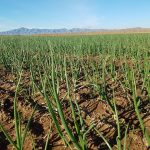 Market and Crop Updates for March 9