A transportation hub in the Treasure Valley has received the endorsement of Oregon Gov. Kate Brown, and Business Oregon is looking at possible site acquisition, according to reports from the governor’s office.

Such a hub could be built in Malheur County and has been the subject of discussion for a number of years. Last June a meeting was held at Treasure Valley Community College in Ontario, OR, to examine the feasibility of an intermodal transportation hub, with two Oregon State Legislators, Rep. Cliff Bentz (R-HD 60) and Greg Smith (R-HD 57), taking part in the gathering. Both men sit on Oregon’s Joint Committee on Transportation Preservation & Modernization and met with a group of both non-government and government individuals in Ontario.

At that time Railex LLC was being considered for service operations. Railex currently provides refrigerated rail service from transload stations in Wallula, WA, and Delano, CA, to points east with another facility planned for Chicago. In January it was announced that Union Pacific acquired Railex’s refrigerated and cold storage distribution assets in the Western locales along with a facility in Rotterdam, NY.

During the June meeting Rep. Bentz noted that a commitment from the rail service would likely put the burden of cost for the facility on southeastern Oregon and potentially southwestern Idaho. The price tag was estimated at $22 million, with the facility then leased to the service provider.

He also said at that time that the 14-member Joint Committee on Transportation Preservation & Modernization had scheduled a tour of several sites in the region with the Oregon Department of Transportation “to determine the what improvements are needed for roads and bridges which includes the Treasure Valley’s need for a rail hub.”

Gov. Brown became directly involved in the project after touring the Treasure Valley on Feb. 10, assessing damage from the succession of snowstorms that hit the region in January.

Among those who met with the governor in Feb. 10 was Grant Kitamura, managing member of Murakami Produce in Ontario.

Kitamura told OnionBusiness.com that he initially met with Gov. Brown on Feb. 10 here in Ontario “as I was her guide to view some of the farm buildings and onion storages that had collapsed from the record snow fall.” Gov. Brown was “astonished by the overall destruction and she was truly sympathetic about our plight,” he said.

In addition to the storm damage, the governor and Kitamura also discussed the importance of agriculture in Eastern Oregon “and more specifically about the onion industry and its economic impact locally; she was very interested,” he continued. “We also briefly discussed bi-modal transportation and the importance of our onion growing region to maintain its competiveness in the national marketplace.”

That in-person discussion was followed by a phone call on Feb. 21 during which Gov. Brown wanted to know more about the importance and need of bi-modal transportation in the region.

“I stressed that it was very important as we are very far from our markets and very much in need of a transload center to engage in efficient bi-modal transportation,” Kitamura said. “This information was well-received by the governor, and she was very positive.”
Kitamura said an industrial park and transload hub “would be of amazing benefit to local ag producers, [and a] transload facility would certainly help onion shippers and processors for a sizable radius surrounding Malheur County.”

He said, “The industrial park would help draw in businesses and processors to create added value to our products prior to leaving the region. Now that Gov. Brown has seen the area first hand and realizes our transportation needs and economic situation, she will hopefully work on our behalf with Malheur County Economic Director Greg Smith, State Rep. Cliff Bentz and State Sen. Ted Ferrioli.”

That appears to be the direction the project is going. Following her February tour, Gov. Brown called a meeting at the State Capital of legislators and Business Oregon heads to research the hub’s possible sites and look into land acquisition.

To that end, Business Oregon economic development agency will start by identifying available loans and grants for land purchase. 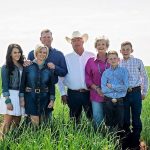