Now in its eighth year of providing testing services on onions for pesticide residue and, on request, for pathogens, Certified Onions Inc. of Nyssa, OR, is ramping up its 2017 efforts as the Idaho-Eastern Oregon onion season starts to roll.

The testing is provided Oregon Department of Agriculture as well as the Idaho Food Safety Assurance Lab.

According to Kay Riley, one of COI’s founding members and general manager of Snake River Produce in Nyssa, the testing efforts are going strong, and he said he expects the service will cover between the vast majority of onion acreage in the region.

“In 2016 we tested 17,869 acres of approximately 22,000 planted in onions,” Kay told OnionBusiness on Aug. 9. Each of COI’s members undergoes voluntary sampling for off-label pesticide use and for maximum residue levels, and there are approximately two dozen members receiving the service. Random testing is also provided for the Idaho-Eastern Oregon Onion Committee.

“When we add the random testing of IEOOC members, our coverage will exceed 90 percent of the Treasure Valley,” he said.

Since it began providing the testing in 2009, COI has received recognition from the onion industry and other entities for its work. In 2010 the Oregon Department of Agriculture presented COI with the “Excellence in Marketing” award, praising the non-profit organization for its commitment to food safety.

“We have never had a positive test for pesticide residue,” Kay said, noting members are vigilant in their efforts to keep the product free of contaminants. That portion of the testing can extend through the end of harvest, and pathogen testing, which is carried out by the Idaho Food Safety Assurance Lab, can extend into storage.

Kay also announced a new board member, Bob Simerly of McCain Foods in Fruitland, ID. Bob is an agronomist and brings a strong skill set to the group, Kay said.

In looking at the new season, Kay said, “It’s shaping up to be busy, for sure.”

He said the crop looks good in August, although it is maturing somewhat later than in years past due to a late planting season and cool weather during the spring and early summer.

“But it looks to be very good quality and manageable size,” he said. 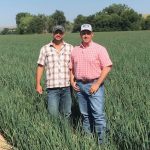 ProSource rocking the season with NM, looking forward to IEO