Coldest day ever for Chicago = frozen train tracks and more

By Kathleen Thomas Gaspar
The Polar Vortex that had parts of the Midwest in its frozen grip during this week caused problems both for people and for commerce.

Just an FYI, the National Oceanic and Atmospheric Administration, found online at https://www.noaa.gov/, defines a Polar Vortex as “a large area of low pressure and cold air surrounding the Earth’s North and South poles…” and “refers to the counter-clockwise flow of air that helps keep the colder air close to the poles (left globe). Often during winter in the Northern Hemisphere, the polar vortex will become less stable and expand, sending cold Arctic air southward over the United States with the jet stream (right globe).”

While meteorologists were forecasting a marked improvement by the weekend, in the short run folks in Chicago and Minneapolis in particular could expand on that definition, which brought record low temps and has resulted in train tracks in Chicago being set on fire to keep the cars running.

Further south, Trent Faulkner with L&M Cos. in Raleigh, NC, told us on Jan. 30 how the extreme weather had affected transportation. Trent said, “As I mentioned in the market update, the weather has had an impact on demand. While we haven’t had many issues here, we do know that trucks are freezing up in the extremely cold areas, and Railex is impacted as well. For us, we anticipated the Railex issues, so we haven’t loaded Railex.”

And Don Ed Holmes with The Onion House in Weslaco, TX, explained that weather in the Northeast and Midwest was causing a temporary disruption in the natural flow of product.

“Shippers have their normal lanes,” Don Ed said. “When the Northeast freezes up, people who normally go there with their onions are going to look to the Southeast.” The short-lived result, he said, is the flow being disrupted. Another thing to consider is “how many onions in the pipeline are being frozen,” he added.

Don Ed joked, “Everybody would be better off to lock this thing up and go to the bar and come back next week.”

Taking a look at the disruption in human terms and for product movement, a story posted Jan. 30 at https://theweek.com/speedreads/820665/chicago-train-tracks-have-literally-set-fire-keep-trains-running-amid-recordbreaking-cold noted that parts of the Chicago area were experiencing “wind chills as low as 49 degrees below zero,” and the temp could hit negative 27 that day, making it the coldest in Chicago’s recorded history.

One rail representative was quoted as saying that when temps go below zero, “the metal of the train tracks can contract to the point that it will pull up the bolts holding it in place.” Crews were pouring kerosene on the tracks and lighting it so the tracks would heat up and expand, allowing workers to re-bolt or repair. 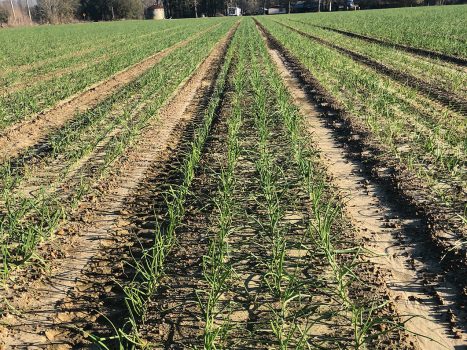