MARKET
Washington:
Brenden Kent with Sunset Produce in Prosser told us Jan. 30, “Demand is still good this week,” adding, “Overall sales have slowed a little as they usually do the end of January.” Brenden said that demand for mediums is “still very strong mainly on medium yellows,” and he said, “The market seems to be stable right now with no change in price up or down. This may change in the coming weeks as the weather starts to get a little better across the country.” He went on to say, “We feel good about the quality we have in storage, and we don’t anticipate any shortages on our end finishing out the season.” Transportation, Brenden said, “is starting to loosen up a bit with more trucks available and more competitive pricing. We look for this to continue as we push through winter and into spring.” And he said the operation’s sweet program “continues to grow, and we are excited about the new Sunkissed Sweet. Customers have really liked the new look and the new sweet offering, and we anticipate our sales to continue growing on these.”

Trent Faulkner with L&M Cos. in Raleigh, NC, told us Jan. 30 that demand has dipped this week for onions out of their Warden operation. “Demand is off a little, but it is mostly related to weather,” he said. “Shipments are having a hard time getting to the Midwest and East Coast. The market looks to be slightly weaker for reds and yellows too because of this and the fact that there are a few onions crossing out of Mexico.” Trent continued, “That said, the domestic Mexican market is so good right now, it doesn’t make much sense for growers to bring many onions across the border at this time. Now, the white onion market is hot! Prices are from $28 to $32, and they are currently very hard to find.” On quality, Trent said the Warden onion quality is very good. “We have been very pleased with the quality all season long and look like we can see the finish line.”

Idaho-Eastern Oregon:
Chris Woo with Owyhee Produce in Parma, ID, and Nyssa, OR, told us Jan. 30 it had been a relatively quiet but steady week. “We’re doing our regular business,” Chris said. He noted that the severe weather in the Midwest was having an impact. “It’s too cold for people to go out and eat,” he noted. Chris also said that the Treasure Valley is significantly ahead YTD with shipments over last year. “We’re 6,000 loads ahead of last year for the area,” he said. And he said prices are decent. “White prices are still high, reds are decent and yellows are steady,” he said, adding that demand should have an uptick next year for Chinese New Year, which celebrates the Year of the Boar.

Utah:
Don Ed Holmes with The Onion House in Weslaco, TX, told us Jan. 30 that the Corinne, UT, deal had not cleaned up entirely yet. “We can see the end of it, but they had a few more onions than we thought and will go into the middle of next week,” he said.

Mexico:
Don Ed Holmes with The Onion House in Weslaco, TX, said sweets have started coming in from the Tampico region of Mexico, and he said, “Quality is good, and volume is light with just a couple of loads a day right now.” He said volume will hit between Feb. 5 and 10, and he added that acreage in that part of Mexico is down this year.

Wisconsin:
Doug Bulgrin with Gumz Farms in Endeavor told us on Jan. 30 the region had been “experiencing terribly cold weather,” and Gumz had shut down the packing facility for the day on Wednesday. But he added, “Demand has been excellent with increasing demand and pricing. We have a shorter than normal supply and are trying to extend supplies to cover key accounts. As we go into the next few months, I see pricing to continue upward.”

Broker’s Perspective:
Jason Vee with Vee’s Marketing in Superior, WI, brought us news out of the deep freeze. He said, “Reds, yellows and sweets are stable. Quality is very good. Trucking is manageable again.” All in all, Jason noted, “I like where we are right now in terms of market conditions.”

And then he added, “Regarding where I am geographically, that’s a different story. I have had more than a few people tell me to stay warm this week. We have had true air temps of 29 below zero and wind chill near 50 below. It’s awful. But hey, it’s Wisconsin. We have been cold before. It’s harder on the animals than the people.”

It also could affect trucks. “I am concerned about my trucks traveling east in the severely cold temps,” Jason said. I run my trucks 55 continuous right now to avoid sidewall freezing. If they are fast deliveries, we shouldn’t have any trouble. The breakdowns have potential to be truck liabilities.”

Looking at pricing, Jason said, “White onions are still higher than a hippie in a hot air balloon. That’s the cleanest metaphor I could muster. I have so many more. The white onion wave won’t last forever. However, the only relief in sight is Mexico, and that’s still two or three weeks away on white onions. Scott Vee was in McAllen, TX, last week and met with Onion House’s Don Ed and Palmer and Sons’ Gary Palmer. Those gentlemen are gearing up for the next onion district. I’ll have Tampico carton sweets to sell in two weeks.”

CROP
California
Trent Faulkner with L&M Cos. in Raleigh, NC, told us that L&M’s Calipatria crop is doing really well. “Looks like we are planning for an April 15 harvest,” Trent said. “We have 400 acres there, and they are starting to bulb and are coming along nicely. We had some pretty good rainfall, but nothing that created any issues. Really, the weather has been good for the crop, and we are excited about this year’s California season.”

Thanks to Danny for the images, one of which we have included as our featured image this week. 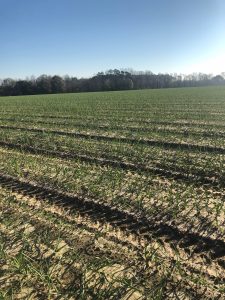 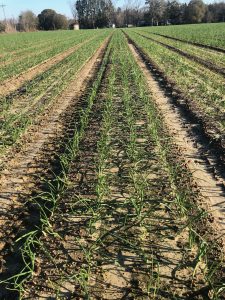 Coldest day ever for Chicago = frozen train tracks and more