Transportation issues stay top-of-mind for most

As of Wednesday afternoon, the Colonial Pipeline was back in business. The several-day shutdown that started last week set off a buying frenzy in the Southeast, with long lines resulting and an already volatile transportation situation looking even worse.

The announcement of the reboot came from Energy Secretary Jennifer Granholm. Colonial Pipeline also released a formal statement, saying, “Following this restart, it will take several days for the product delivery supply chain to return to normal. Some markets served by Colonial Pipeline may experience, or continue to experience, intermittent service interruptions during the start-up period.”

Still, hopes are that the quick action on the part of Colonial averted a worse crisis. The shutdown put a temporary halt to operations by the nation’s largest refined products pipeline system and the potential to affect most industries across the country. The systems of Colonial,  headquartered in Alpharetta, GA, were hacked last week, with the hackers demanding ransom to remedy the situation. Not responding to the threats, the fuel company shut down on Friday and began immediate actions to repair and restore.

Shortly after the shutdown, the Federal Motor Carrier Safety Administration (FMCSA) issued a regional emergency declaration affecting 17 states and the District of Columbia in an effort “provide assistance to areas in need of an immediate supply of gasoline, diesel, jet fuel, and other refined petroleum products.” North Carolina Gov. Roy Cooper declared a state of emergency on Monday due to his state’s gas shortage. Govs. Brian Kemp of Georgia and Ron DeSantis of Florida, and Democratic Virginia Gov. Ralph Northam declared states of emergency on Tuesday.

On Tuesday afternoon, May 11, Colonial issued a statement at colpipe.com, after the site had been down for at least a day. It said emergency means have been undertaken, and fuel deliveries are being accomplished.

The statement, which came out at 5:15 p.m. ET, said, “Colonial Pipeline continues to make forward progress in our around-the-clock efforts to return our system to service, with additional laterals operating manually to deliver existing inventories to markets along the pipeline. Markets experiencing supply constraints and/or not serviced by other fuel delivery systems are being prioritized. We are collaborating with the Department of Energy (DOE) to evaluate market conditions to support this prioritization.”

Colonial referenced its planned resumption of pipeline service, no definite date given, saying, “Additionally, in preparation for our system restart, we have taken delivery of an additional 2 million barrels (~84 million gallons) from refineries for deployment upon restart.

“Consistent with our safety policies and regulatory requirements, Colonial has increased aerial patrols of our pipeline right of way and deployed more than 50 personnel to walk and drive ~ 5,000 miles of pipeline each day.

“Actions taken by the Federal Government to issue a temporary hours of service exemption for motor carriers and drivers transporting refined products across Colonial’s footprint and actions taken by several Governors to lift weight restrictions on tanker trucks should help alleviate local supply disruptions. This is in addition to the Reid Vapor Pressure waiver issued today by the US EPA that will also help alleviate supply constraints in several states serviced by our system.

The Colonial Pipeline carries more than 100 million gallons, or 3 million barrels, of fuel each day along a 5,500-mile stretch. In addition to the gasoline, the fuel represents diesel and jet fuel for 45 percent of the East Coast.

One of the states along the pipeline’s path is Georgia, where the Vidalia onion harvest is in progress. The season kicked off on April 19, and we talked to shippers who are between 50-75 percent done with harvest and who were watching the news with concern. The May 11 statement was late in the day but undoubtedly received with relief.

Colonial said, “ Since our pipeline system was taken offline, working with our shippers, Colonial has delivered approximately 967,000 barrels (~41 million gallons) to various delivery points along our system. This includes delivery into the following markets: Atlanta, G., Belton and Spartanburg, SC, Charlotte and Greensboro, NC, Baltimore, MD, and Woodbury and Linden NJ.

While the pipeline was down, we reached out on May 11 to Walt Dasher, CEO of G&R Farms in Glennville, GA, who summed up the big picture of transportation and freight.

He said,  “We are already experiencing issues centered around a shortage of drivers due to the unemployment crisis, which has greatly had an impact with our current freight rates across the country due to a lack of drivers to pull from, and now this! We desperately need help in getting this issue with driver shortage resolved ASAP so the industry doesn’t continue to see delays in shipping and very abnormal cost associated with it.”

Walt continued, “This situation with the pipeline is only going to add to the already serious issues with carriers and therefore put even more pressure on the demand for goods and services and cause massive delays even further as well as increased product pricing. The consumers are the ones that are going to get greatly impacted by all of this in the end, which is going to cause even more stress on individuals.”

He concluded, “It is almost the perfect storm situation with trucks and carriers already, and now with companies of any type across the Southeast United States.  We have all learned from the past it doesn’t take a lot of chatter to really cause oil prices to increase and then a very long time for things to settle back down and resolve itself at the pumps or in the retail sector. Once again everyone needs to be having discussions as much as possible and push to try and get everything resolved as quickly as possible for the sake of everyone.”

We also contacted Aries Haygood, owner of M&M Farms in Lyons, GA, and chairman of the Vidalia Onion Committee, and industry members in other regions as well. Aries said he’s “about 75 percent finished with harvest,” adding, “We have enough fuel as of now to finish, but it depends on how dry it gets and other conditions. We just don’t know. We’re trying to figure out which way we’re going each day.”

John Shuman, president and CEO of Shuman Farms in Cobbtown, GA, also commented on May 11, saying, “We’re right in the middle of harvest, and we’re hoping to finish in the next one to two weeks.” He added that it’s difficult to gauge what impact the pipeline shutdown might have. “We’re starting to hear rumblings, but we just down know yet what the severity will be. Our fear is it could exacerbate a short freight market and freight prices.”

Of the overall transportation situation that has been worsening for the past year, John said, “I’ve never seen anything like this in 27 years, and this (pipeline shutdown) has the potential to make it worse, depending on the severity.” He added, “We depend on tractor-trailers and flatbeds to move the product to the warehouse and to get product to market. Do we have enough fuel to finish harvest? I don’t believe so.”

In Columbus, NM, James Johnson with Carzalia Valley Produce is also in his shipping season. James also took a big-picture approach, saying, “Transportation has been an issue and will continue to be. Unemployment benefits continue to plague transportation and packing as well as harvesting.”

And in Nyssa, OR, Tiffany Cruickshank with Snake River Produce said although that company is finished shipping for the 2020-21 season, there are possible effects down the line.

She said, “I have business associates who’ve told me that this is making it harder to move produce from A to B. As challenging as it has been over the past year, from a transportation standpoint it will compound the problem. We have concerns for all parts of the supply chain.”

Colonial noted in its release, “Colonial will move as much gasoline, diesel, and jet fuel as is safely possible and will continue to do so until markets return to normal.” 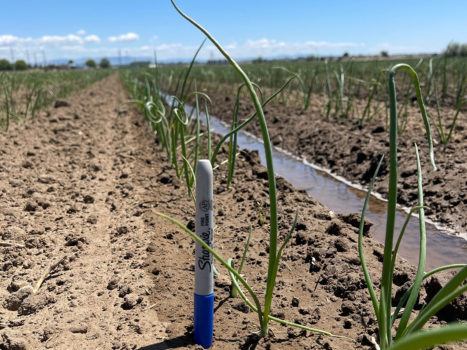