More than two dozen onion industry members – including grower/shippers, distributors, suppliers and commodity groups – are among the 270 exhibitors at the 2018 Canadian Produce Marketing Association convention and trade show in Vancouver, BC.

The event will take place April 24-26 at the Vancouver Convention Centre on the city’s downtown waterfront, and this year’s show will feature a full slate of educational sessions, great speakers, networking opportunities, tours and the trade show.

A retail tour will take place the morning of Tuesday, April 24, followed by a CPMA members general meeting and later a hockey classic and the chairman’s welcome reception.

As a primary export market for the U.S. onion industry, Canada and its CPMA are important links for domestic growers and shippers. Making the most of the chance to meet with existing and potential customers, companies and groups from California, Washington, Idaho-Eastern Oregon, Pennsylvania, New Jersey and Georgia will have booths, and many more will walk the trade show floor to maintain and establish contacts.

OnionBusiness.com caught up with Bill Hartman, IEO grower and member of the Idaho-Eastern Oregon Onion Committee’s export committee, recently. Bill will represent the IEOOC at its booth. Also attending will be Dallas Jensen, representing his company, Champion Produce Sales located in Parma, ID.

He said the show’s setting, while lively and engaging, is also laid back, and attendees have ample time to meet up and visit. And, Bill said, the committee’s annual exhibit has resulted in “traction from being a part of the show.”

Bill told us that the Canadian show, in whatever city hosts it, is a good setting to keep the USA Onions brand top in receivers’ minds. “Our goal is to keep our brand out there,” he said, adding that most of the Treasure Valley onions exported to Canada go to the Eastern provinces, with a good mix of retail and foodservice through distribution from terminal markets.

Bill commented that export volumes to Canada remain mostly stable year-to-year, although freight and transportation are more and more factors in deciding how far the onions are shipped. 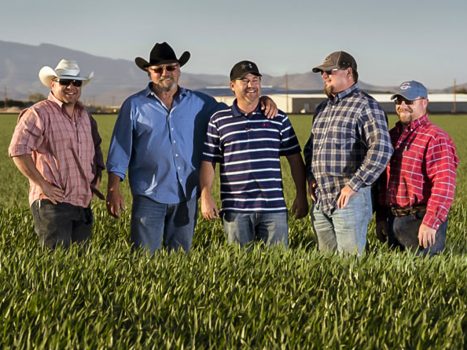