OnionBusiness’s Sherise Jones attended the Crookham Onion Show in Wilder, ID, on Aug. 23, where she had a chance to visit with Crookham owners and staff as well as seed reps to learn more about the company’s goals with this year’s trials and what they expected to gain from the show this year.

Crookham Company President George Crookham told Sherise that after 20 years of investment, hard work and dedication to the onion seed category, “It’s beginning to pay off.” He said, “We have some real workhorse varieties in our portfolio that can benefit growers, and we have developed great relationships with our dealers – and it’s all starting to come together.”

Zane Beams with Seedway said, “You can call it what you want or put any name you want on it, but the Northwest is starting to get hotter. The Crookham portfolio has varieties, like Defender, that can truly perform in a hot climate and are bred to be virus-resistant. That’s a big deal. In fact, I had a grower send me a photo of a field of Caliber, and the tops were absolutely magnificent!”

Lyndon Johnson, Onion Sales and Development Manager, told Sherise that he was pleased with the onion show turnout and the interaction between growers and dealers and Crookham staff. “The show was well-attended, and it was a great opportunity for us to expose our new varieties, Epic and Defender, to our growers and showcase our other long and mid-day onion varieties. Despite the challenges we had with heat like our grower friends had throughout the valley, we are pleased with how our are varieties performed,” he said.

Seed breeder Dave Whitwood also weighed in on the benefits of Caliber. “Caliber seed has a lot of vigor,” he said. “It’s just a real workhorse and performs well for the grower. Defender has also been a great choice for growers. It’s a real strong hybrid onion seed.” When asked about why so many growers tout the qualities of Crookham’s Caldwell variety, Dave said, “It’s a great processing onion. First, it’s on McCain’s processing list. It produces a high volume of single centers, and its rings separate easily. Growers really do like it.” 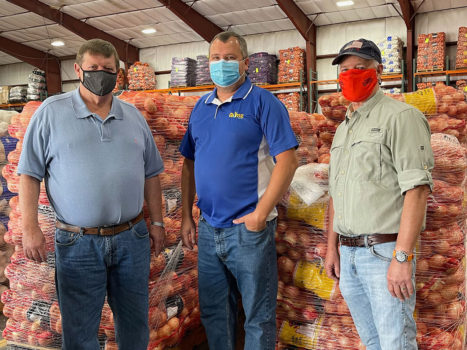