Twenty varieties will be showcased at the Crookham Co. long day onion trial in Wilder, ID, on Aug. 27, and according to Dave Whitwood, Crookham’s long day onion breeder, all the varieties are in production and will be introduced for the 2019 season.

OnionBusiness.com caught up with Dave as he was traveling through the Tri-Cities/Columbia Basin growing region of Washington on July 30, and he said he was there evaluating intermediate trials.

“We’re looking at new varieties to introduce in the next two or three years,” he said of the NW trials. “We have 32 varieties being evaluated, and out of the 32 one or two will more forward.” Dave also said he had recently finished trials in the Central Valley of California from Bakersfield to Sacramento. The company also conducts trials in Colorado, Utah, North Dakota, Michigan, New York and Quebec. 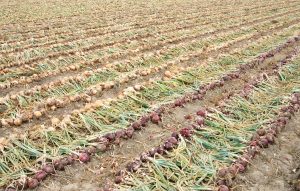 Looking ahead to Wilder, he said the varieties that will be showcased are especially suited to the Treasure Valley of Idaho-Eastern Oregon as well as “other long day markets.” There will also be a presentation during the show by short day breeder Filippo Rimi, and Dave said in addition to discussing long day varieties he will also talk about intermediates for the Treasure Valley, Washington and other areas.

The trials have resulted in new varieties that show pink root and fusarium resistance while also presenting high yields and a high percentage of single centers.

“The growers can use less input with onions that have these results,” Dave said.

Spanish Sweet varieties are in the mix, with #08105 a new experimental yellow variety that will be available for the 2019 season. “It’s going to give high single center and uniformity for storage,” Dave said, noting the 08105 will size out to grower/shipper specs for their markets. 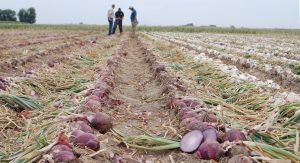 Another new late intermediate/early long day variety being showcased is the #4500, which he said is a very mild onion with good storage. It’s shown strong trial results for more than three years, and Dave said the onion sizes up nicely from jumbos to colossals.

The most popular yellow, he said, is the early Scout, which can “allow guys to open their sheds 10 to 12 days earlier.” Another good variety for the Treasure Valley is the Oracle, which Dave said shows good results in older dirt and has a more resistant, greener top.

There are three red varieties at the show, all 112-115 day maturity with high single center and good interior color. And there are three whites as well. Dave said Crookham has seen an uptick in red and white seed demand, with the reds finding a good market in gourmet burger and sandwich outlets. 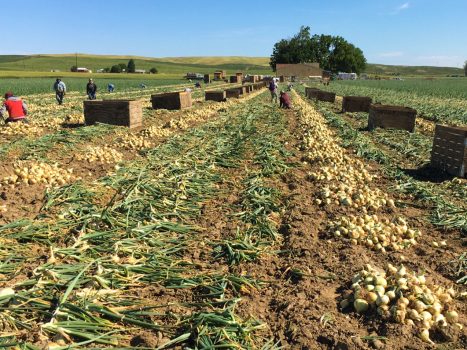