MARKET
California/Nevada:
Jessica Peri with Peri and Sons in Yerington, NV, told us on Aug. 1, “We are harvesting the long days in California and will be shipping through mid-September from our Firebaugh packing shed. We started harvesting in Nevada on Monday and will begin packing on Aug. 20 in Yerington.” Jessica added, “We had organics in Firebaugh and will start right away with organics in Nevada, good supply and availability.” And she said, “The Sweetie Sweet program is rolling in California, and we will have a smooth transition into our Nevada crop.”

California/Washington:
Rick Minkus with Minkus Family Farms in New Hampton, NY, told us Aug. 1 his operation is currently shipping out of California and Washington. “Quality is kind of ‘hit and miss’ right now,” he said. “Demand and the market for yellows are level, but the reds have backed off some. Customers are waiting to see if the prices lower. When buyers smell blood in the water, they take a wait and see attitude.” When asked about transportation, Rick said, “Trucks are more readily available, but the rates are still high, so it continues to be a big issue.” 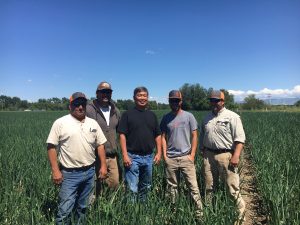 Walla Walla:
Dan Borer with Keystone Fruit Marketing in Walla Walla told us Aug. 1 that Keystone is in peak production for its Walla Walla program. “We are about two-thirds of the way through our season, and we are experiencing a firm market and excellent quality,” he said. “We should have supplies to extend through the latter part of August.” Dan added, “We have been blessed with a very good crop this season, and in turn we’ve received good repeat business. In fact this season we were fortunate to run some great promotions with major retailers for in-store demos and social media. One retailer ran posts combining our watermelons and Walla Wallas that achieved over a million views. We are thankful that we’ve had these types of ‘think outside the box’ opportunities to promote our relatively small crop.” Thanks to Dan Borer for providing this week’s featured image, Walla Walla onion harvest.

Washington:
Dan Borer with Keystone Fruit Marketing in Walla Walla reported on Aug. 1 the Washington hybrid program has started with shipments of yellows and reds. “We are just starting to get fired up,” he said. “So it’s really too early to judge what we are looking are for in sizing, but all indications are it’s going to be a normal year for us. It’s important that August is a transition month, and from our perspective retailers are still focused on moving fruit like melons and such. So September is when the retailers will start focusing on onions, giving them more floor space.”

Larry Bauman with L&L Ag in Othello told us on Aug. 1, “The transplant onion harvest in Pasco is going well with a large physical size and good yields. It is too early to make the call on how the last two weeks of hot weather will affect the overall size of the storage crop. The hot weather has caused additional thrips control and added cost of production.” Larry added, “Our sales manager Carl Frank and Dan Commins with Onions Direct LLC attended the PMA meeting in Monterey last weekend. They enjoyed the meeting and connected with most of our customers.”

Falon Rufty with Onions 52 in Syracuse, UT, told us on Aug. 1 that the Washington season has started, and she added, “Everything is looking good. We are harvesting and packing in Washington on all three colors right now. Size is good, right where we like it to start with.” She said Onions 52 also has “beautiful sweets in Washington, a very good crop,” as well as organics. And Falon noted the tearless Sunions grown by Onions 52 in Washington will be harvested in August and put into storage to cure and sweeten. They will start shipping in November/December, she said. 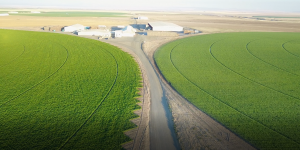 New Mexico:
Trent Faulkner with L&M Companies in Raleigh, NC, told us L&M is finishing up its New Mexico program. “We have about another two weeks in New Mexico,” he said on Aug. 1. “These late varieties are smaller so we have mostly pre-packs and mediums left. The quality remains good, but they are just on the smaller side.” Trent said demand is fair. “There are a lot of small onions out there,” he said. “And while I wouldn’t say the market is hot, it has remained steady.”

Onions 52’s Falon Rufty reported to us on Aug. 1 the company will have onions out of New Mexico for another 10 days to two weeks, finishing in mid-August.

Jason Pearson with Eagle Produce reported on Aug. 1 from his sales office in Nyssa, OR, “We are still shipping out of New Mexico, but we are set to ship the last of it out this Saturday.” Jason added, “We are shipping yellows. Reds and whites are really tight. There are a lot of mediums and some jumbos left. The market has been stable, but there is a lot of cheap stuff coming out of California.”

Vidalia:
Dan Borer with Keystone Fruit Marketing in Walla Walla, WA, told us Aug. 1 that there are still supplies of Vidalia onions. “Quality is still looking good, and we should have enough Vidalia onions to get us through August,” he said.

CROP
Oregon/Northwest:
Our friend Trish Lovell with Curry & Co. in Brooks, OR, said next week will see the start of Curry’s Oregon season. She said on Aug. 1, “We, like the rest of the Pacific NW, have experienced high temperatures. Weather is expected to cool down starting today. We will see temps in the mid-80s.” Trish added, “Harvest has begun here in the Willamette Valley. We anticipate starting production next Monday, Aug. 6. We will have reds, yellows, and sweets to start. Yields appear to be average, sizing profile definitely up from last year.” And, she said, “We will have great quality with ample supplies in all sizes and colors to offer our customers. Looking forward to a great season this year!”

Idaho-Eastern Oregon:
Jason Pearson with Eagle Eye Produce in Nyssa, OR, said that the Eagle Eye Idaho-Eastern Oregon program will start Monday, Aug. 6. “We will start out with yellows, adding reds in two weeks and whites two weeks after that,” he said. “Quality is looking excellent here.” Jason noted that he has added a staff member in the Nyssa sales office. “We have hired Lisa Bowman to help us out, and she is in her third week.” 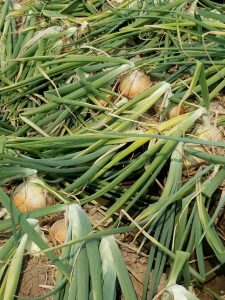 Early onions as of August 1, courtesy of Grant Kitamura

Grant Kitamura with Baker & Murakami Produce in Ontario, OR, told us on Aug. 1 harvest will begin the first part of next week and they will start packing about seven days after that. “We have four growers ready to start bringing in onions,” Grant said. “So we will start slowly but will pack all colors and sizes from the get-go. We aren’t jumping the gun – these early onions are ready. They are mature, with good shape, good shoulders and decent appearance.”

Dan Phillips with Central Produce Distributors in Payette, ID, reported that it will be another two weeks before Central starts shipping. “Everything looks good out there. We have had some heat which is a little concerning, but we are planning and making adjustments with that in mind,” he said. “We are really looking forward to this season because we have made improvements that should help us out a lot. We have a new onsite storage facility and we have added a 300-foot x 60-foot warehouse that will give us some much-needed floor space. With transportation the way it was last season with inconsistent rail and poor truck availability, we had to do something, and adding more floor space will help us with that.”

Falon Rufty with Onions 52 in Syracuse, UT, said Oregon Trail’s crop grown in the Nyssa, OR, region is on schedule. “The crop is looking great,” Falon said.

Utah:
Onions 52 in Syracuse, UT, reported Aug. 1 that Utah will start the third week of August. According to Falon Rufty, harvest of yellows and reds will start mid-month, followed by whites in mid-September.

Kansas:
Trent Faulkner with L&M Companies in Raleigh, NC, reported on Aug. 1 that L&M will start its Kansas program within the next 10 days to two weeks. “We were going to start up a little earlier, but we received some rain, so we are letting the onions dry out a little before we start harvest” Trent said. “Actually, the recent rains will be good for the crop finishing. We have a great setup in Kansas. We have fields with both drip and irrigation so the onions we can get water to will get a little more size, and we will end up with a great mix of all sizes.”

New York:
Rick Minkus with Minkus Family Farms in New Hampton told us that the crew has done a small amount of hand harvesting on transplants, but Minkus New York onions won’t be shipping in full swing until the latter part of August or the first part of September. “Our transplants are a little on the smaller size,” Rick said. “It looks like our seeded onions will pass the transplants at this point. Even though we are running a couple weeks behind normal, overall the crop is looking very good. We were pretty dry, but we received five inches of rain last week, and that’s about all we need.”

Peru:
Dan Borer with Keystone Fruit Marketing in Walla Walla, WA, said on Aug. 1, “The onions are on the water. In fact, we have received two shipments on the East Coast. We are in a slow start, but shipments will be picking up around mid-August. Because of the slow start, it’s too early to tell on sizing, but our expectations are that this year’s quality will be good with fairly normal volumes.”