OnionBusiness.com’s Sherise Jones was among the group attending Crookham Co.’s seed trials on Monday, Aug. 27, and she reported on several varieties, including the numbered 11162.

The event took place at the Allen Mark farm near Wilder, ID, and Sherise said, “A good group of growers had the chance to see a wide selection of Crookham’s red, white and yellow onions trialed this year.

“We had a little heat, as everyone did in the valley, but overall our onion varieties performed very well,” Dave said.

He added, “We are particularly excited about our 11162. It is a grower friendly yellow that can be abused yet still performs very well. It has good roots, nice bulb size and the potential for producing nice colossals and super colossals. The tops are noticeably upright, and it is pretty remarkable how thrip resistant it is.”

Dave also said that the unnamed seed is in production and has gained a lot of interest from Crookham’s dealers and growers.

Watch the video of George Crookham where he explains more about this variety and two other new yellow varieties that the company is extremely excited about this year.

While the focus of the trials was on long day onions, Crookham’s Filippo Rimi, PhD was at the trials to share information about the company’s short and intermediate program.

Filippo joined Crookham’s about a year ago and is charged with short day breeding activities, and he also assists Dave with the company’s intermediate program.

Filippo came to the United States from Italy, where he worked on athletic fields and pastures.

“When I first arrived in the United States, I worked in academia on research projects, and now I handle short day breeding New Mexico and the San Joaquin Valley,” he told Sherise. “I am also working our program expansion to the Imperial Valley, Texas and Mexico.”

Filippo continued, “In my first year with Crookham’s what has impressed me is the close relationships we have with growers and our ability to develop programs that fit their needs. It’s also a plus that I am not only a breeder, but I am closely involved in production. Even with the best seed, if you don’t have production, you don’t have a successful program.”

Filippo noted two red varieties that Crookham is extremely excited about. “Our 1041 is a mid-season short day red,” he said. “It has nice shape and very good color, inside and out. Our 1541 intermediate is very hardy and has a nice globe shape with uniform sizing and great color as well.”

He also said he’s excited about the company’s three pre-commercial early yellow varieties developed for the Imperial Valley, the 1174, 2082, and the 1120.

View all the samples of the short and intermediate varieties below, along with the long day onions that were part of this year’s successful onion event, and some attendees you might recognize. And for more information about Crookham onion varieties, call 208 459 7451 or go to http://www.crookham.com/

Short day and Intermediate samples on display at the Crookham onion event: 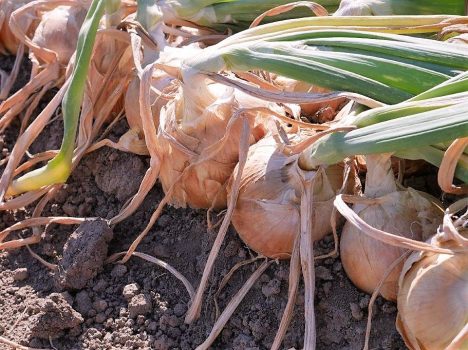