Colorado onion growers who are in partnership with The Onion House in Weslaco, TX, are currently planting the 2016 crop, and Don Ed Holmes said the Western Slope fields “are very similar to what they were a year ago.”

Utah growers who market through The Onion House in Weslaco, TX, are planting this year’s crop, according to Don Ed Holmes.

Dale DeBerry of AllVeg Sales in Boerne, TX, told OnionBusiness.com he was headed to Georgia for the start of the Vidalia deal on April 25. “Everything looks really good,” Dale said. “They’ve started harvest and are starting to dry the onions, and we’ll be ready for the first loads to go out on Monday.”

Larry Denke of Agri-Pack in Pasco said his company’s overwinter onions have come up as “really nice stands,” and he added the growers will know more in May about quality. “If all is good, we will start shipping early to mid-June,” he said. “The direct seeded is good, with a perfect growing season. The wind has been light, with warm temps in the morning, so everything looks really great right now.” Larry also said more information will be available next week regarding Agri-Pack’s organic deal this year. Agri-Pack will also be handling Vidalia’s starting April 25-29.

Grant Kitamura at Murakami Produce in Ontario, OR, told OnionBusiness.com the early crop is looking very good.  Growers are seeing good progress and uniformity in the stands, and with temperatures in the IEO region warmer than average, growers are working hard to get the water to the crops.  Kitamura said most all acres in the region have been planted. 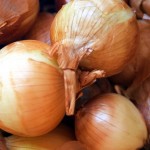