Onions will start out of Chihuahua, Mexico, around May 10, according to Don Ed Holmes of The Onion House in Weslaco, TX. Don Ed said that short deal will run into June.

Ashley Robertson at Fort Boise Produce in Parma, ID, said 100 percent of Fort Boise’s fields are planted and have been for a few weeks. “It all looks good right now,” Ashley said, adding that the region has had great growing conditions. Harvest time will depend on weather conditions, and she said growers started planting about 10 days early but finished on a more normal schedule due to some wet weather during planting. The company’s program will not change this year, she said.

At Snake River Produce in Nyssa, OR, Kay Riley and Tiffany Cruickshank said the company’s growers have finished with planting, and there will be a slight increase in red acreage this year although overall acreage is very similar to last year’s. “We expect volume to be similar as well,” Kay said. He and Tiffany noted water should be much less of an issue this season, with close to full allotment given to the growers. The sweet program will be “ample for the market,” Kay said, and he said harvest should commence between Aug. 10 and 15 after an early start to planting. Both onion vets said growing conditions to date have been “ideal.”

Shawn Hartley of Utah Onions in Syracuse said the planting is completed for the 2016 crop, and it “all looks good” at this point. If everything goes as it should, harvest will start up in September. “It’s all normal now,” Shawn said, but he added weather will be the deciding factor. 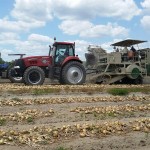