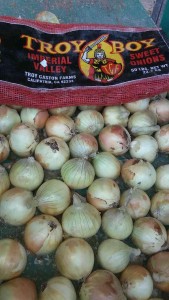 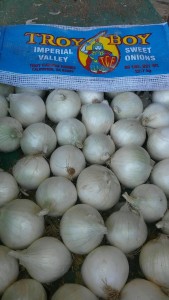 John Vlahandreas with Wada Farms reports Imperial Valley movement is very good on yellows, and price is very favorable. He said to look for continued movement and pricing not changing much on yellow onions over the next week. “We will shift into our second variety on Friday, April 29,” John told OnionBusiness.com. “Our first whites were packed on Tuesday, and they are well cured and bright. We’ll start red onions on Friday. That market seems to be very active.” John added, “Everyone is in, and we should start notching up production in the valley. The target date for finish here is Memorial Day.”

Robert Bell of Western Onion said his operation was doing custom harvesting for clients in the Imperial Valley as well as packing its own product. First loads went out on April 26 for Western, he said. The Imperial Valley’s overall crop, as seen in photos provided by WO (under separate heading in this week’s edition), looks good, and all varieties are being harvested and moved – including organics.

Ashley Robertson at Fort Boise Produce in Parma, ID, said final loads of 2015 onions are being shipped from Fort Boise this week. “Overall it was a good season for growers,” she told us. 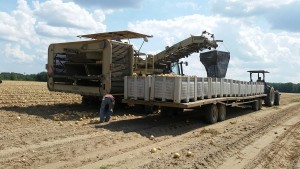 Chris Woo of Murakami Produce/Potandon Produce’s Ontario, OR, office reported in from Glenville, GA, for Ray Brothers Farms and Potandon. He said the market heavy to 40# cartons, and the stickered sweet market is “decent.” Chris said, “This year’s crop is very sweet.” He added that “Ray Brothers Farms is using state-of-the-art harvesting equipment from Top Air for the first time.” The equipment is the only type of it’s kind in the Vidalia region as far as Chris knows, and it is “greatly assisting in a quick and efficient harvest.”

Don Ed Holmes of The Onion House in Weslaco said his operation will finish clipping next week, and he anticipates being done with shipping on May 4. “The market is down from $14 last week to $12-$13 today,” Don Ed said on April 28. He attributed the downturn to end-of-the-month business as well as new players from California and Georgia coming in, and he said the market “may still leak off a little” in the next few days. “First-of-the-month business should see things stabilize,” he said. Whites were doing well at $18, and he said he’d seen good movement for Cinco de Mayo and for Mother’s Day. “Texas quality is outstanding on all the reds, whites and yellows we have, and we have everything in consumer packs,” he said.

Shawn Hartley of Utah Onions/ Southwest Onions Growers said that company is still shipping sweets out of the Rio Grande Valley and will into May. “It’s all going well,” he said. Utah Onions will switch to the New Mexico crop in late May or early June. Shawn, who is the current president of the National Onion Association, encourages everyone in the association to attend the summer convention July 13-16 in Niagara Falls, NY. For more information, go to https://www.onions-usa.org/members/noaconventions