This is a time of transition with the onion crops around the country. Areas that were providing crop news for the past months are now shipping. More IEO onions will move this week, and crops in Indiana, Michigan and New York are nearly ready for harvest. General reports we’re receiving at OnionBusiness.com are that those crops are fairing very well. In the meantime, the sweet program buyers anxiously await the Peruvians, which, as reported last week by Dan Borer at Keystone Fruit Marketing, are expected to do well. Next month OnionBusiness.com will report on planting for Texas and Vidalia. Growers are preparing now.

Larry Baumann, owner of L&L Ag Production in Connell, WA, told us,  “I just finished looking at all our north basin fields and see a good crop that is sizing normal. Some early varieties are starting to tip over. The seeders showing in most varieties will be in a normal year average. Some neighboring fields are being topped and harvested.” 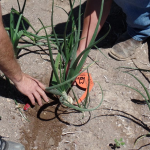 Ponderosa Partnership LLC in Center, CO, has 60 acres of Spanish Sweets nearing harvest, according to Farm Manager Jake Burris and Operations Manager Jed Ellithorpe. The onions, which were planted for mixed loads with the potatoes grown by the operation and marketed by Aspen Produce, are about four to six weeks away from harvest and were sizing as mediums when sampled from the field. Jake said the all-conventional onions will ship during the winter months and will be packed in 50-pound mesh. A new label is being developed – stay tuned! 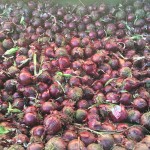