Last week we looked at how some of the changes in transportation affect the onion industry, focusing on labor shortage and considering Uberization. This week, we’ll tackle the prospect of autonomous vehicles, the shape of things to come…

One of the best explanations of the autonomous truck comes from Freightliner, maker of the first self-driving commercial truck to receive a road license plate. The story was written by Antuan Goodwin for http://www.cnet.com/roadshow/news/freightliner-autonomous-inspiration-truck/ and was posted in May 2015.

Goodwin wrote about the commercial carrier that “can steer and drive itself, while the driver relaxes and enjoys the ride.”

Safety statistics show that 90 percent of commercial truck accidents are due to human error, and Goodwin said that one in eight of those is from driver fatigue.

“The Inspiration Truck… doesn’t need any autonomous vehicle-specific infrastructure, special beacons or special lanes of its own. The camera-based technology needs only clear roadside signage and crisp white stripes — which, coincidentally, are also helpful for human drivers as well.

To date eight states have approved testing of autonomous, NOT necessarily defined as driverless, trucks, and 18 states have proposed bills for highway usage of the vehicles. Stats show that there will have been 600,000 of these trucks sold by 2025, and by 2035 autonomous trucks will make up 15 percent of motor carrier sales.

The Goodwin piece said that the Inspiration Truck “still requires that a driver be in its driver’s seat. A person needs to get the truck moving from a stop, handle complex low-speed maneuvers and to monitor autonomous drive.”

What’s more, the technology has the driver being notified “with visual and audible cues in the event that conditions won’t allow confident autonomy (such as snow, rain or on roads with poorly defined lane markers) and a human is needed to take over.”

But when “driving conditions are optimal, however, and the road stretches out ahead, the Inspiration Truck’s driver can set the Highway Pilot and tend to other parts of the business of logistics.”

More about autonomous/driverless trucks can be found in a story posted at http://www.thetruckersreport.com/ata-self-driving-trucks-are-close-to-inevitable/ in which yet another piece was quoted — this one published by The Wall Street Journal titled “Daddy, What Was A Truck Driver?”

That story, TheTruckersReport.com said, predicted that “the future of commercial trucking lies in self-driving trucks. All the non-drivers quoted in the article agree that it’s not a matter of if, but rather a matter when… including the director of engineering and safety policy for the ATA, Ted Scott, who said that ubiquitous, autonomous trucks are ‘close to inevitable.’”

And how do trucking companies receive this news? “Perhaps it is not the prediction that is most unnerving, but rather the excitement with which the heads of major trucking companies look toward the driver-less future,” TheTruckersReport.com piece said. It went on to quote a company owner’s reaction: “`Holy —,’ exclaimed the safety director at a 300-truck firm. If I didn’t have to deal with drivers, and I could just program a truck and send it?’” 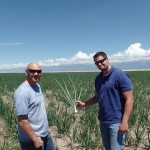