Doug Bulgrin of Gumz Farms in Endeavor, WI, said the operation has harvested 10 acres thus far, but rains have delayed the harvest this week. Gumz Farms hopes to be in full production by Sept. 1, he said. Doug told OnionBusiness.com that currently the yields are average, and the size profiles are leaning toward jumbos and large mediums. “The crop has very good quality for the yellows and reds we ship,” he said.

David DeBerry of Southwest Onion Growers/Utah Onions in McAllen, TX, reported Colorado’s Western Slope crop looks good, and one of the growers represented by Southwest Onion Growers started harvesting on Aug. 24. “We’ll start packing next week,” David said, adding that another grower will be starting Sept. 5. “We’ll be at full volume for intermediate hybrids Sept. 12,” he said. “The crop is normal with a good mix of sizes from mediums to colossals. There’s not an overabundance of extremes, with mostly jumbos.” He said weather in recent weeks has been good, and he noted, “We’ll be shipping more onions this year than last year. Our long day onions are also looking good, and we’ll start putting them under cover the first week of October. Shipping will start Oct. 20-25. Everything looks really good. What we lost to hail in June is gone but not forgotten, and the crop otherwise has not seen significant disease of insect pressure. Everyone here is ready to go.”

David DeBerry of Southwest Onion Growers/Utah Onions in McAllen, TX, said Mexico has seedbeds up, and direct seeding will start next week. 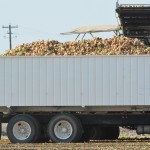