Mexico:
Mike Davis with Tex-Mex Sales LLC in Weslaco Texas reports that the Mexico crop is looking very good. He said Tex-Mex is on track to start shipping at the end of this month or the first part of February. Mike said, “A lot of the timing will depend on prices. It looks like Mexico is going to have a good crop this year.”

Don Ed Holmes with The Onion House in Weslaco said good weather continues to bless the Mexican growing season, and he said, “We will have Mexican new crop sweets on Wednesday, Jan. 18. They should be clipping whites the middle of next week, and those should be here Jan. 23.”

Texas:
Don Ed Holmes with The Onion House in Weslaco said the Rio Grande Valley crop “is looking really good.” He told OnionBusiness on Jan. 11, “We got some cool weather over the weekend, but it’s back up to 80 degrees today. We’ve got some wind with humidity, and it’s the same thing in Mexico.”

Mike Davis with Tex-Mex Sales LLC in Weslaco Texas reports that everything is looking good for the Texas crop and things are coming along as planned. “We should have our Texas 1015 crop available the first part of March, and the rest of the crop will start shipping sometime between the end of March and the first part of April.”

California Imperial Valley:
Cindy Elrod with Peri and Sons in Yerington, NV, told us recent heavy storm activity in the West is “making things look good for California water,” and she said crops in the Imperial Valley “look fantastic.” She said. “The area got some rain, and the stands are looking great. We’re thinking now that we’ll start on time in May, but there’s a lot that can happen between now and then.”

California San Joaquin Valley:
Cindy Elrod with Peri and Sons in Yerington, NV, said the first planting in Firebaugh, CA, is looking good. “The intermediate planting was delayed somewhat due to weather, but we should finish planting this week. The ground is taking all that water in because it was so dry there, and there’s no ponding,” she said. “We should have everything planted there in February – we’ll plant the long day onions then, and once that’s finished, we’ll move the equipment back to Yerington and start our planting in Nevada on March 15. Right now things look very good for what’s in the ground.” 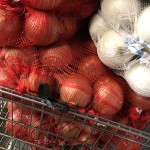