As reports of roofs collapsing under heavy snowpack continue to come in from the Treasure Valley in Idaho-Eastern Oregon, OnionBusiness.com learned late Wednesday that the city of Ontario, Oregon was declared an Emergency Area. State legislators then requested Oregon Gov. Kate Brown to declare a state of emergency for Malheur County. Governor Brown subsequently declared a state of emergency for the entire state of Oregon. In her declaration, Brown ordered the Office of Emergency Management to coordinate dispatching Oregon Department of Transportation, Oregon State Police and Oregon National Guard resources to areas throughout the state.

The Treasure Valley’s onion industry has taken a huge hit, with more than a dozen structures, including some packing lines and several storage sheds, have collapsed under the weight of heavy snow on the roofs. Commercial buildings such as Wal-Mart in Ontario, OR, closed their doors until the snow was removed from the roof, and a major supermarket and sporting goods store both suffered at least a partial roof collapse Wednesday afternoon.

That news comes on top of reports of more than a dozen onion storage and packing buildings collapsing, many empty but some containing thousands of full bins. The destructive weather event that combined record snowfalls with warmer rain was dubbed by local news outlets as “Snowmageddon,” and it is also threatening the Treasure Valley as the Snake River, jammed by ice floes and now moving swiftly, breaches its banks.

The weather also caused road closures that affected area commerce this week, with portions of Interstate 84 closed on Wednesday, Jan. 11, for snow-caused pothole repairs along a stretch near Nampa, ID.

But one positive note in the story is that as of Wednesday morning no injuries had been reported as the result of the cave-ins.

The storm’s devastation, however, is nearly beyond comprehension.

That incident was followed on Monday by the report of a storage shed collapse at the Tamura facility in Wilder, ID, owned by Champion Produce Sales. The shed held 2,500 full bins, and Champion had halted operations. Another Weiser onion storage with 2,500 empty bins was down, as were a packing shed and a storage facility in Payette, ID, and a packing facility in Nyssa, OR.

By Tuesday, Jan. 10, at 5 p.m. OnionBusiness.com had confirmed a storage facility in Ontario, OR, had collapsed on 2,000 full bins. Four Rivers in Weiser lost an onion storage on Tuesday. Three additional empty onion storages in Ontario were reported to have collapsed earlier in the week, along with one in Nyssa, OR, and one in Vale, OR.

More snow is in the forecast for the week of Jan. 17, but on Jan. 11 the area was experiencing a break in that weather. However, at the same time warm temps were melting roof snow, the Snake River continued to rise, and evacuation warnings were in place along the waterway.

Damage reports coming in on Wednesday included confirmation from Herb Haun that Haun Packing in Weiser did lose a building, but luckily the building did not have onions inside. Herb said that the rising river is a concern, and area residents are watching it closely.

Herb also noted the operation has a building and a farm home close to the river, and the crew is keeping a watchful eye on the situation. He said, “Years ago we lived near the river when weather eventually caused us to evacuate. When we did have to leave, we had about a half a day to get things up off the floors and get some things out. So people do have a little bit of time, but they just need to watch it closely because things can change quickly.”

“No employees were hurt at the time, and we will rebuild all facilities this summer with the latest technologies,” Eddie said.

Partners’ processing lines in Payette and Nampa, ID, as well as the fresh pack facility located in Ontario, OR, remained unaffected as of Jan. 11, he said. “In all, we lost three buildings,” Eddie told OnionBusiness.com. “Luckily the storage facilities didn’t house onions, but one of the buildings contained packing supplies and some equipment.” Eddie further noted the collapse of the fresh pack line is going to have a major impact on the amount of fresh pack onions Partners will ship. “Our loss could be approximately 25 to 30 million pounds we may not be able to pack this season,” he said.

“And what people don’t understand is that we can’t just jump back on line. This is going to take us at least seven to nine months to get this line functional again. It’s pretty crazy right now. We have adjusters flying in to assess the damage, and it is still very unsafe to get in there.” He said fortunately the company is diversified, and Partners is running double shifts at other facilities.

“We have had to redirect some of our customers to other sheds,” Eddie said. “That is the one good thing about the Treasure Valley. We are competitors, but we’re friends too. In times like these, we help each other out.”

Veteran onion salesman Chris Woo at Murakami Produce Co. LLC in Ontario told us the weather has caused “danger zone” conditions. “I have been here 40 years, and I talk to people that have lived here all of their lives and have never seen anything like this,” Chris said. “I am surprised the region hasn’t been designated as a disaster area. Some of the buildings that have collapsed are older wood frame buildings or buildings with wood beams and cinderblock walls that can’t bear the weight of the snow, freezing rain and melt off.”

He continued, “The collapse of onion and non-onion buildings is widespread, and we definitely aren’t out of the woods yet. We are and will continue to be in a state of emergency.”

Owyhee Produce in Nyssa posted a market report in its blog on Jan. 11 at http://us11.campaign-archive1.com/?u=7adaf132fbb3ddfaca1a66a09&id=3c2f9f258b, in which Shay Myers wrote, “We’re in the middle of unprecedented circumstances. This is the most snow that has ever been received in living memory in the valley and the collapsed buildings testify to that. We’re trying to be cautious of our assessment of the damage. This all happened too quickly. The loss of the buildings I speak of all happened between Saturday and Monday afternoon. To be honest, we’re still trying to wrap our minds around things.”

Personal accounts of the damage earlier in the week included that by Dwayne Fisher at Champion Produce in Parma, who wrote on Monday afternoon, “As many of you have probably heard, the recent storms in Idaho have left plenty of devastation. Multiple packing facilities have collapsed, and even more onion storage facilities are no longer standing. We have so far lost one storage facility with 2,500 plus bins, and currently all of our Idaho facilities have structural concerns or issues. We have sent all packing employees home for their protection.”

Dwayne continued, “We are currently working to get snow loads removed from the buildings to prevent further loss. Rain and more snow are forecasted in the near future and could lead to further issues. This a.m. our Tamura packing facility had a small fire caused from our neighbors losing their steel buildings and bringing down power lines with it. I was fortunate to find the fire and put it out before we had a total loss.

“The entire Wilder plant is without power, and all onions currently packed on the floor are ruined from smoke damage,” he wrote. “At this point we are not sure when we will be able to get back up and running. We are doing all in our power to find solutions and prevent further damage, while protecting the safety of our employees.”

Ken Stewart, general manager of Four Rivers Onion Packing in Weiser, confirmed that operation’s packing shed roof collapsed on the afternoon of Sunday, Jan. 8. Stewart said, “We’re not packing now, and it could be a long time. We really have no idea when we will pack.”

In addition to the region’s onion industry, other commercial businesses throughout the Treasure Valley have suffered huge losses. The Weiser bowling alley collapsed, as reported in the Argus Observer, in addition to a furniture store in Parma and a county fair structure in Ontario. OnionBusiness.com has been advised an Ontario Les Schwab structure and a farmers co-op also caved in, and reports continue to come in regarding storage facilities for vehicles and equipment having collapsed. One report said the onion processing plant in Ontario had two building roofs cave in, and the plant has shut down. Wal-Mart in Ontario was closed temporarily due to the snow load on the roof, as broadcast on local TV.

As many shippers and businesses work to clear roofs, buildings sag from the weight of the snow. One onion source told OnionBusiness.com crews were using forklifts, bins, and other equipment to brace the structures as snow removal continued.

View the updated photo gallery originally posted on 1-9-2017.  Additional photos have been added.

Recent Nevada weather snarls traffic in and out of Yerington 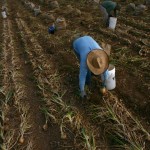