Grant Kitamura of Murakami Produce in Ontario, OR, told us that the early IEO crop looks to be in good shape with nice size profile and good tops. Murakami growers are three weeks from harvest and will start shipping the first part of August. The storage crop is coming along and so far looks very good, he said. Grant said the area is expecting some heat in the next week with over 100F temperatures. “Then next month will tell the story for how the storage crop finishes,” he said.

Ken Stewart of Four Rivers Onion Packing in Weiser, ID, said the 2016 crop “looks very good overall,” adding, “We have some issues with some fields, which is normal, but the crop looks better than normal, and we expect to be shipping by Aug. 15.” Ken said the current market continues to be strong, and he said, “We’re looking forward to good market conditions.”

Jason Walker with Bybee Produce in Prosser said the crop is looking very good, and growers have had favorable weather conditions this year. “They haven’t experienced extreme heat like they did last year, which has improved a growing conditions,” he said. Because of the better weather, the crop may have an increase in size profile this year over last. Jason reported that Bybee Produce will have all colors and all sizes available Aug.1.

David DeBerry of Southwest Onion Growers said Colorado’s Western Slope is a couple of weeks away from harvest, and he said the region should start shipping “Sept. 1 if not sooner.”

David DeBerry of Southwest Onion Growers in McAllen said growers in the Tampico region are getting ready to start planting the third week of August. “We have seen some beneficial rains in Tampico, which is good for getting the ground ready,” he said. “Our growers there as well as other growers in that area are saying the program will be very similar to last year, starting planting around Aug. 25 and getting really serious about it on Sept. 1. We expect to start shipping out of Tampico Jan. 20, with the bulk of volume between Feb. 10 and April 10.” The region produces sweets, Spanish onions, whites, reds and yellows in all pack options.

David DeBerry of Southwest Onion Growers in McAllen said South Texas hasn’t seen the rains that Mexico has been receiving, but he said lake levels are fine, and he expects “no shortage of water during the growing season.” Planting will start mid- to late September, with the bulk of the planting done between Oct. 10 and Nov. 10 for spring shipping.

Who’da thunk it! The hows and wheres of food production going mainstream 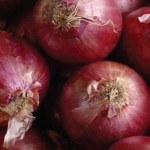